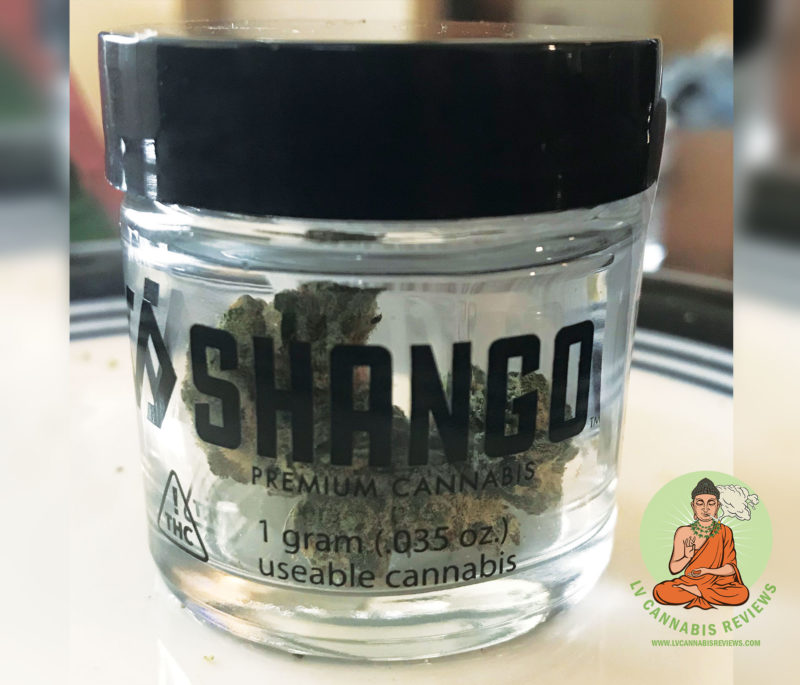 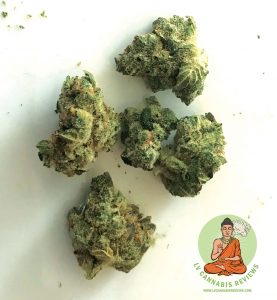 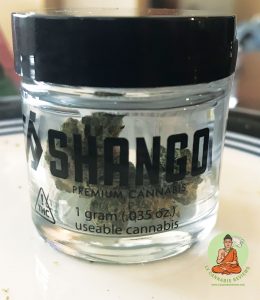 Shango’s A-Dub is packaged in a little glass jar. The nugs are thick and streaked with crystal trichomes. A-Dub jumps out from the menu because of its cannabinoid and terpene profile. A quick glance shows that the buds are heavy with THC.

Appearance 4/5
A-Dub isn’t going to impress anyone by its looks. It lacks the swirling purples and deep oranges that enthusiasts clamor for. The buds are a pale green color with hints of yellow and orange. The color is obscured by a silvery sheen of trichomes.

Aroma 4/5
A-dub is a potent mix of Sour Diesel, Sour Bubble, Alien Dawg, and Chemdawg. It is powerful, but it is not very pungent. Grind up a few nugs of A-Dub and catch whiffs of tangy lemon. If a stoner is looking for buds that they know will knock them over by their scent, this strain is not the one.

Flavor 5/5
One word: delicious. A-Dub’s slightly musky taste is softened by sweet citrus tinges. As the smoke fills the lungs, smokers will be able to detect the different flavors. In addition to the fruity twang, there is an earthy, plant-like flavor that lingers on the back of the tongue.

Effect 5/5
A-Dub will make users forget their own name. Just kidding…well maybe. This Shango-grown strain tests at a whopping 28.40% THC. That is enough to send even experienced smokers sky high. The buds are also loaded with limonene, with the current batch testing at 6.86 mg/g. This terpene is associated with stress relief as well as a bevy of health benefits like anti-fungal properties. Smoking a bowl of A-Dub produces a happy, mellow effect.

Medical patients searching for pain relief or a sleep aid should look into smoking A-Dub. The powerful blast that hits the body after smoking a puff might be enough to knock out the aches and pains. If a user is worried about THC-induced anxiety, but still wants to smoke a potent strain, A-Dub could work. The cerebral effects feel muted.

A-Dub is one of Shango’s flagship strains. It tastes delectable and hit me with a gentle, pleasant body high. I am adding A-Dub to my repeat strains list. Smokers should experiment with A-Dub if they are intrigued by the meaty dose of THC. Smoke a bowl after a workout or any sort of physical exertion. The muscles will appreciate it.

Shango is gigantic. It is half-dispensary and half-grow operation. A stoner can buy cannabis raised directly on the property. Professional security guards man the front door. Make it past them and one will find themselves in an oddly sterile room, decorated with a motorcycle and a few artificial plants. This isn’t where the magic happens. That is in the next room. That is where a smoker can really fall in love with Shango. The dispensary is clean, brightly lit and extremely well-staffed. If a consumer wants knowledgeable, friendly budtenders, come to Shango. Each wall is fronted by a glass case stuffed with products. The budtender leads each customer around the room like a ride attendant at Disneyland. Prices are a little steeper than most dispensaries, but there are a ton of in-store deals you can take advantage of.

The real reason to come to Shango is for their incredible menu. Their in-house grow operation is one of the strongest in town. Every concentrate that you can think of, from shatter to budder to infused edibles is for sale. Their range of strains is impressive as well. In fact, the menu is so plump, it is hard to figure out what you want.

Pro Tip: Bring an exit bag to save $2