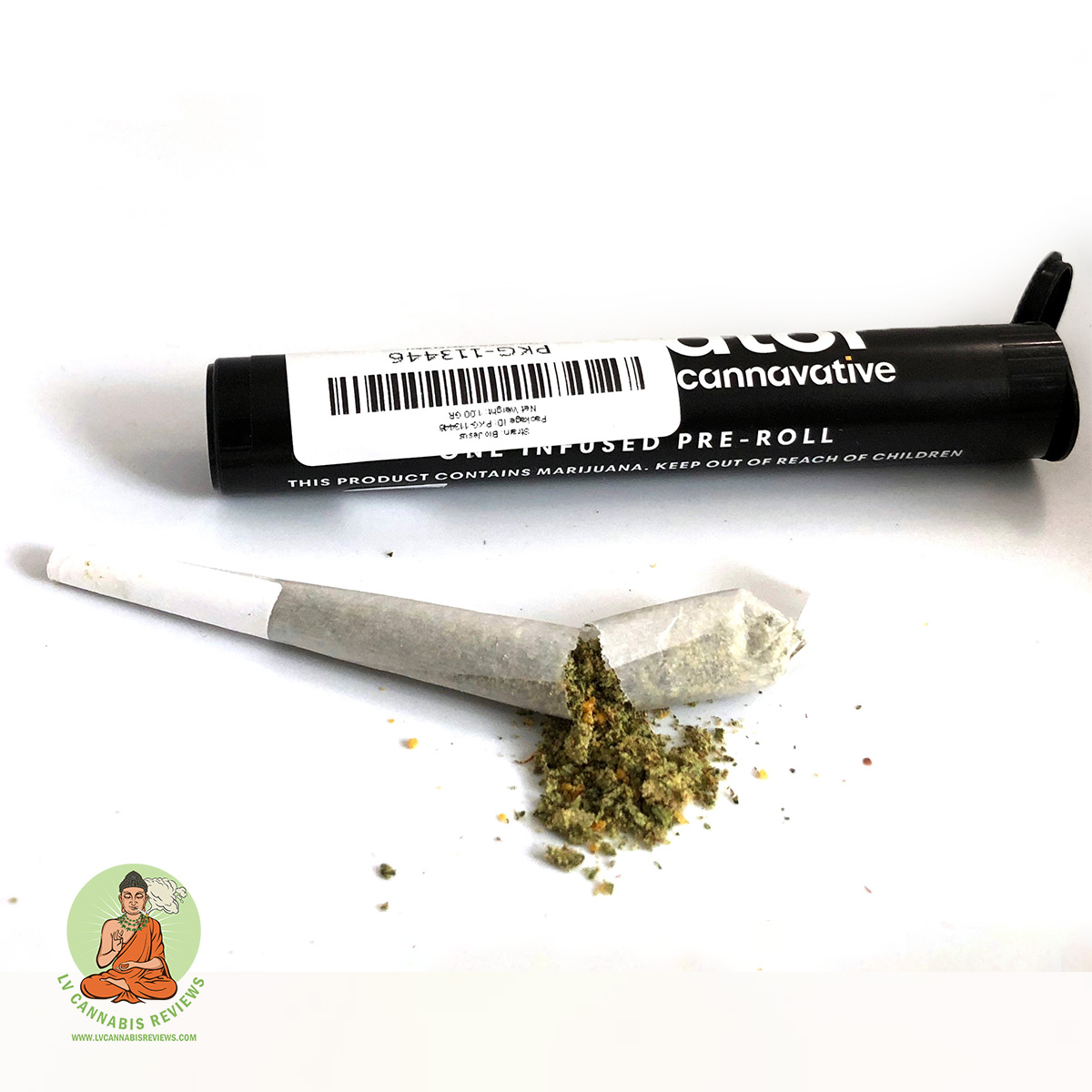 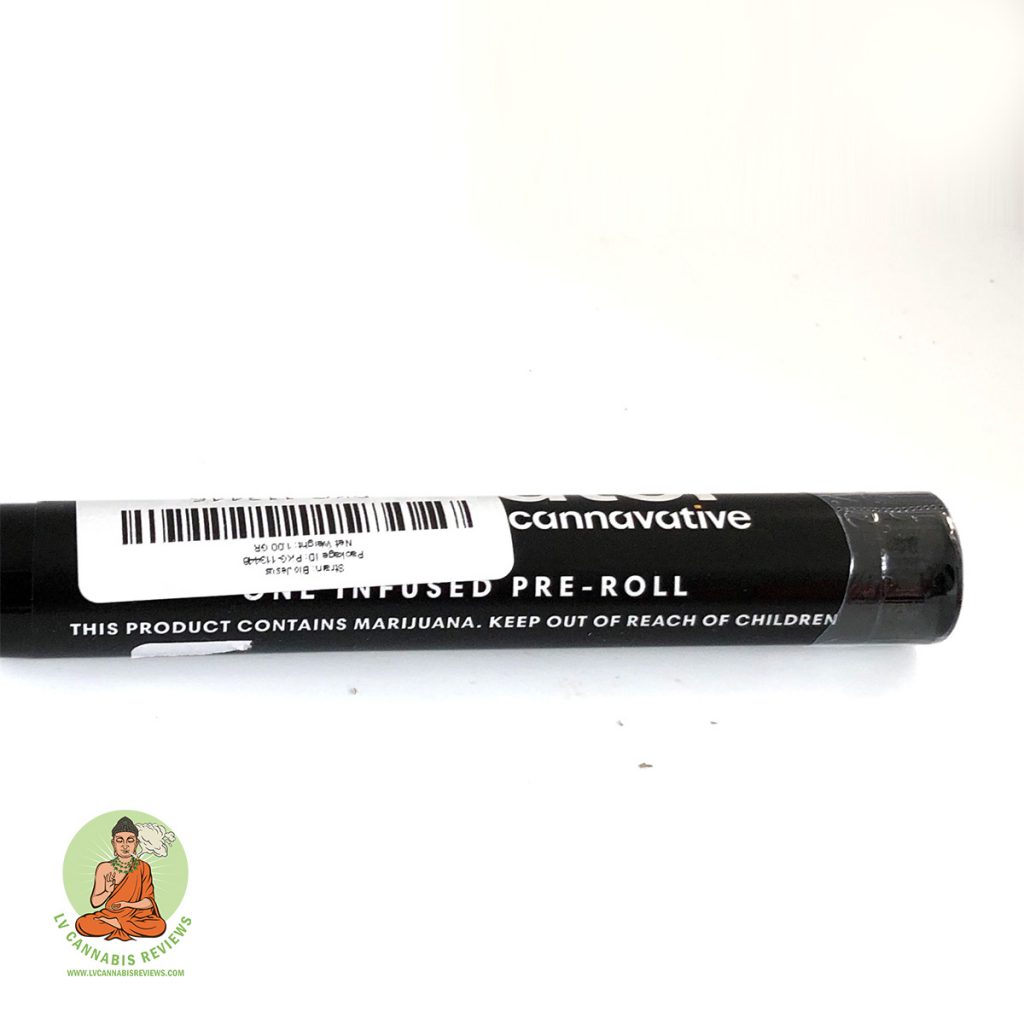 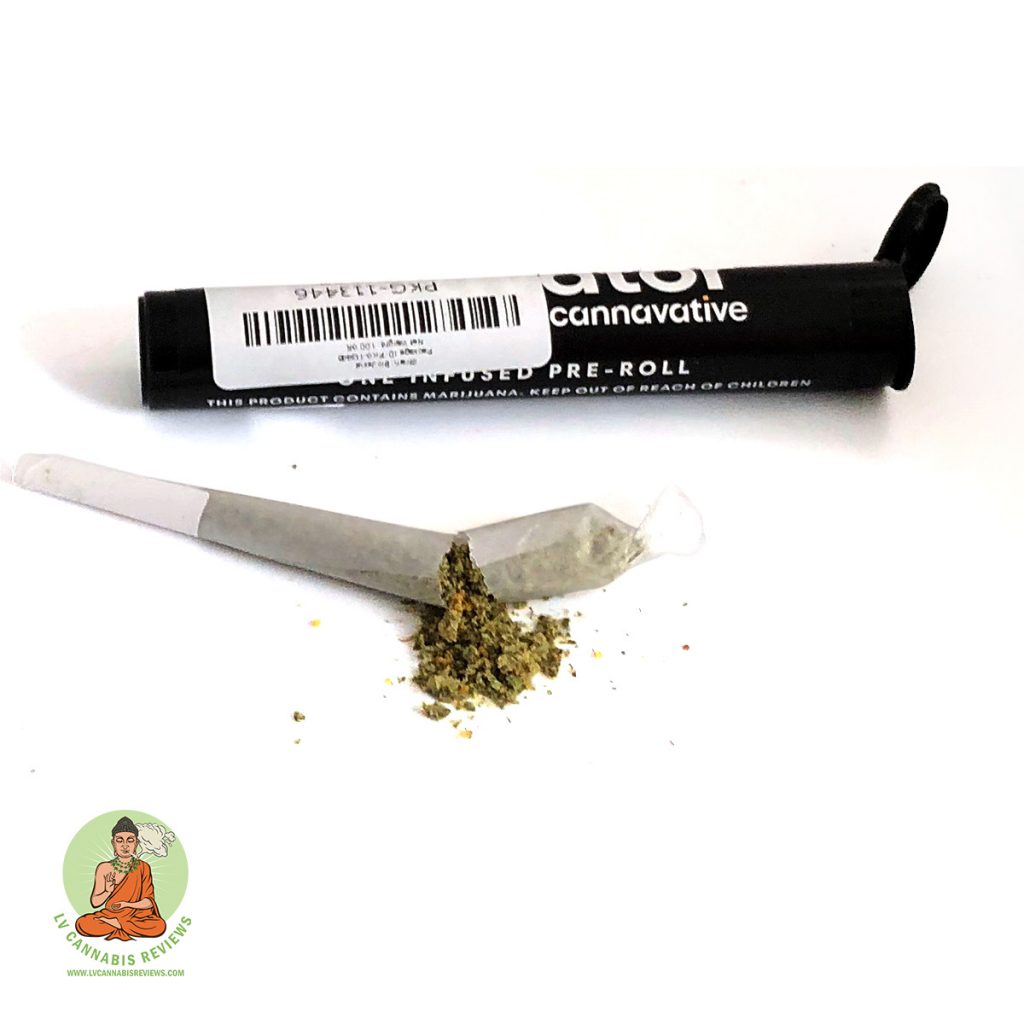 Appearance
Sparkly green weed ground nearly to powder and orange specks of honeycomb 100%
Aroma
Regular, plain-jane weed 60%
Taste
Flavors of the forest congealed into one note 80%
Effect
A heavy dose for someone who doesn’t smoke often but not overpowering for a stoner 100%

Strain or Product
Cannavative’s Bio-Jesus Motivator pre-roll is infused with honeycomb. My budtender pointed it out when he saw me hanging around the pre-roll display. I told him I was in the mood for a joint, but I needed something strong. The Bio-Jesus pre-roll instantly popped out as a viable candidate. I didn’t need much convincing before I was sold.

Appearance 5/5
Crack open the pale, thin paper keeping the joint together, and you will find sparkly green weed ground nearly to powder and orange specks of honeycomb. It is interesting to actually see the concentrate. Often, infused pre-rolls are mixed with oil rather than with chunks of solid material. The little orange dots of honeycomb look like eggs in a bright green field. Don’t pluck them out. It’s more fun to smoke with the concentrate evenly spread out.

Aroma 3/5
The smell is a bit muted compared to what I expected. It smells like regular, plain-jane weed. I thought that my nostrils would at least be able to catch a few of the sweet notes thrown into the air by the honeycomb. But I couldn’t. I could only detect an uncomplicated, plant-like aroma. Bio-Jesus smells like the type of weed that I used to buy from friends. Blindfolded, I would say that I was sniffing appreciation-tier buds rather than an infused pre-roll.

Taste 4/5
Well, it doesn’t taste holy. I have no idea how Bio-Jesus buds taste on their own. I do know that Bio-Jesus mixed with honeycomb tastes delicious. The flavor isn’t subtle; the smoke races rather than glides down my throat. It tastes like the flavors of the forest congealed into one note. That heavy flavor is softened by traces of honey and fruit. The overall taste would be horrible if it were slathered on a piece of toast, but it works for cannabis.

Effect 5/5
This preroll is 0.8g of flower and 0.2g of honeycomb. It’s testing at 48% THC, a heavy dose for someone who doesn’t smoke often but not overpowering for a stoner. Concentrates often hit the 80% and higher range. The first hit burns the smoke is so harsh. It’s much rougher than I expected, concentrates usually produce velvety smooth smoke. I think I was stoned before I was done exhaling. I started coughing so hard anyone watching me might have thought it was my first puff.

The Bio-Jesus Motivator is an awesome pre-roll to share with a buddy. I’m okay with being a weed hog. Hey, it’s legal now. Get your own! However, there is still something pleasant about sharing a joint with someone. This is a good one to share because it’s so strong you may not want to smoke it all yourself.

For $22, the Bio-Jesus Motivator by Cannavative is a good deal. It is a cheap way to get flower and concentrates at once. Would I buy it again? Possibly. That’s a weak answer, but it’s the best that I can do. An infused pre-roll is almost always an impulse buy.

Dispensary
You should go to The Source. There, I said it. I’m biased toward The Source. It’s one of the few locals joints that’s getting everything right. The little annoyances that crop up at other weed shops rarely happen here. Their process is utterly streamlined and efficient. The experience starts out in the old familiar way, with you handing your ID to a usually smiling receptionist. She punches in your details, and you are on your way. This is where the consumer experience at The Source diverges from what typically happens. Instead of being sequestered in a stuffy lobby, you can enter the dispensary immediately.

If you want to browse the store, you are free to linger by the wood-paneled display cases until you see something that catches your eye or until one of the roaming budtenders latches onto you. If you already know what you want, you can skip speaking with budtender and stand in line at once. I usually know what I’m looking for before I show up to the dispensary, but I can be lured by a good deal or particularly appealing buds.

Apparently, I am not the only one who has discovered the joys of The Source because the dispensary is almost always packed. You have to wade through a throng of people. Still, the superior management techniques refine the process, so it’s not painful. The place is thick with people, but it never has that rushed, Walmart on Black Friday vibe. Everyone is relaxed. The line moves quickly.