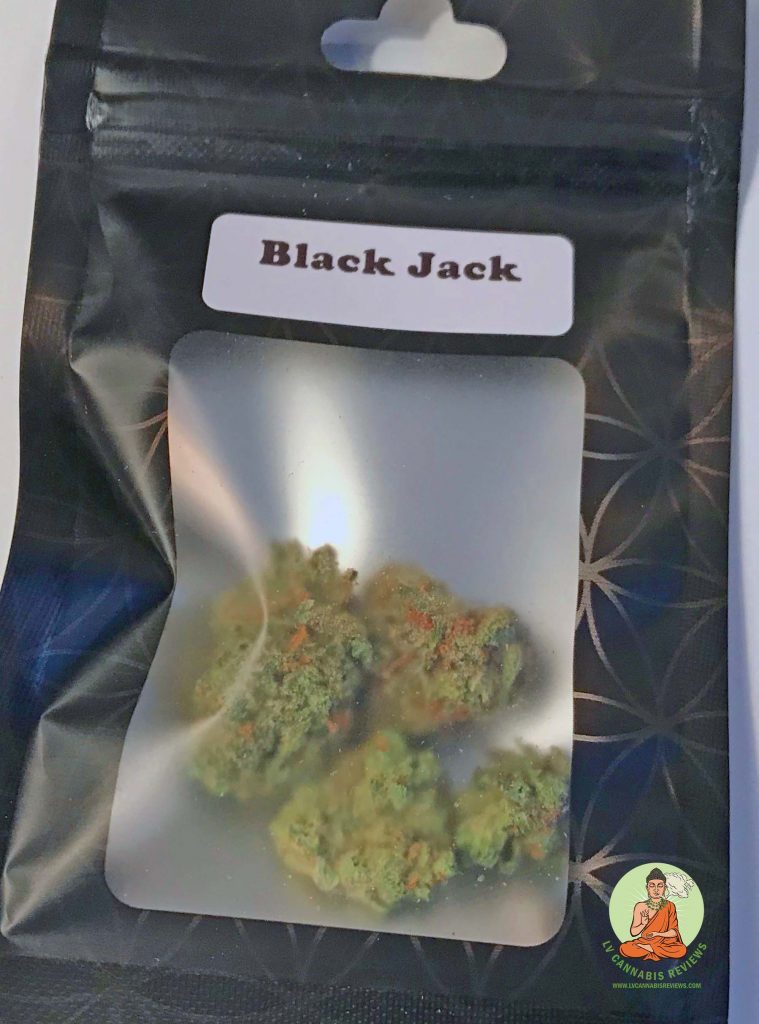 I will admit, I was drawn to Black Jack by Kiff because of the price. I can’t resist cheap weed. It calls to me like a siren. I was able to pick up Black Jack for less than $10, although a gram is usually $12 or more.

Appearance 5/5
The buds are tightly packed. They are fat like odd-looking walnuts. Sticky resin glistens on the nugs. The flowers are a deep green color. Orange pistils thread through the bud like strands of hair. The color scheme works. There is nothing surprising here, but that is not what the eye is searching for.

Aroma 3/5
Users who don’t like the smell of weed might not mind the relative weakness of Black Jack’s smell. Someone could store these buds in their bedroom and their housemates would be none the wiser. I had to get a good whiff of the nugs before I could say much about the aroma. It is a musky, spicy smell that can’t be easily boxed in. The weed smells like an unsweetened apple pastry. Instead of sugar, I smell warm spices.

Taste 5/5
Black Jack has a distinct diesel taste that threatens to overpower everything else. Only users with a good palate will be able to distinguish other flavor notes in the smoke, or those who smoke a lot. After a couple of bowls in a row, the flavor lingering in the throat becomes more pronounced. I like it because I have a hankering for strange-tasting weed.

Effect 5/5
Black Jack was a surprise. My body is used to THC. Strains that test at less than 20% rarely attract my interest. Black Jack initially hooked me with its price and delivered more than expected with its smoke. There is nothing subtle about Black Jack’s effect. A big, bold high, bursts over the body as soon as the smoke enters the bloodstream. The gram might last longer than normal because it is so potent. Alternatively, users might demolish it even faster than usual for the same reason.

Black Jack could potentially help a lot of medical patients. It is only testing at 19% THC. That is enough to generate a solid high, but not enough to induce panic for most individuals. Inexperienced smokers are prone to thinking wild thoughts the first time they get stoned. If they consume too much THC, their train of thought could easily take a detour down a dark road.

Black Jack by Kiff is a meatier strain than it seems at first. Occasionally, Cultivate will sell this strain for less than $10. They are budget buds that smoke as though they came from the top tier. The high is strong enough to affect your entire day. The strain was a success for this stoner and Cultivate exceeded my expectations, making it one of the top weed stops in Las Vegas.

Cultivate has one of the strongest deal games in town. They change rapidly, however. You have to pounce on a good deal the moment you spot it. If you sign up for Cultivate's text system, you will receive notifications of the juiciest deals.

The dispensary is located in a thriving part of town. It is close to the Strip, yet far enough away that traffic is rarely an issue. I almost have nothing to say about the budtenders because I was in and out so quickly. The entire process was over before I could register it, like buying a pack of gum at a gas station. If you want the day’s deals and can’t receive texts, call the receptionist.

In addition to constant deals, Cultivate offers noticeably low prices. If you show up on a good day, you can find some of the cheapest grams in town. That is one of the reasons why Cultivate is so popular online. Their reviews are almost entirely positive. Tourists and locals alike appreciate the low prices. Cultivate’s staff is very efficient. It is a rare compliment in a world where a 20-minute wait at the dispensary isn’t unusual.