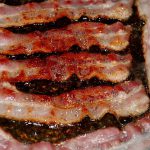 I’m not exactly sure how, but the common pig sure can provide some super scrumptious meals. Pork chops are some of the tastiest dishes in town, and anything ham-related is always a crowd-pleaser. But there is one part of the swine’s culinary repertoire that never disappoints, and that, my friends, is the world’s favorite strip of meat known as bacon.Everyone’s relationship with this salty treat is different, but regardless of where your love affair started, chances are it shows no signs of slowing down anytime soon. If you’re like me, any chance I can add bacon to something – I do it. No questions asked. And every single time that I do, it takes a mediocre meal to new heights with the utmost ease and deliciousness. It truly never fails to hit the spot.What’s even better about bacon is you can utilize its greatness during any part of the day.Want a few strips to rest alongside your eggs and toast? Done deal, dig in. Interested in making that cheeseburger a “bacon cheeseburger”? By all means, go for it! Want a healthier option for dinner? How about you wrap those asparagus spears in some of America’s most prized pig meat product? That always works for me.Step By Step Recipe For Chocolate Cannabis-Infused Bacon
The only meal type left is dessert at this point. And, while I’ve enjoyed the novelty idea of a bacon ice cream or candy, I often find that those are better left as “ideas” – because the reality of a pig-flavored confection just doesn’t have as much a success rate as its more cooked counterparts. Which is fine. Hey, nobody’s perfect, right? So what if bacon doesn’t belong in dessert dishes – big whoop. Who cares?I had that mindset for years, to be honest. And I’m ashamed to say that I found myself content with a dessert menu that was sans-bacon. But, as the years wore on, I grew to miss the chance of seeing a pork-related option as a sweet post-dinner treat. So, I knew it was high time to change that.So, after some trial and error, and hours upon hours of Googling, I think I’ve solved that problem once and for all. And if any of you, fellow pig enthusiasts, are looking for a bacon-inspired dessert item to add to your bag of bacon tricks I think you’re really going to like this one.Party people, I’m about to tell you how to make chocolate-covered bacon.But, not just any chocolate-covered bacon…Some chocolate-covered cannabis-infused bacon.That’s right. You know a recipe’s going to be good when there’s more than one hyphen. However, before I launch into a list of ingredients and whatnot, you have to make sure you’ve got some cannabis-infused butter on hand. If not, this whole recipe will be lacking a certain “potency” if you catch my drift. If you don’t have any – no worries. I’m sure your local dispensary has got a few tubs of THC butter on deck, but if not, I can quickly break down how to make some of your very own in the comfort of your kitchen. I already have a separate recipe for this, so if you’d like, you can venture on over to that link for a more in-depth discussion on how to make some cannabis-infused butter from scratch. But, for the time being, allow me to summarize the process as quickly as possible.You’ll want to toss in a cup’s worth of ground cannabis into a saucepan. Make sure the heat on the stove is at 240°. Any higher, and you’ll burn your bud to a crisp. This specific heat level allows the decarboxylation process to take place. Which is just a fancy way of saying, it activates your cannabis, and readies it to be combined with any sort of element. In this case, it’ll be combined with some regular butter. Speaking of, this is where you’ll want to add in a cup’s worth of butter into the saucepan. I prefer to have the butter pre-melted upon adding it to my cannabis, but you can allow the heat from the stove to take care of that for you if you like. Then, after 30 minutes or so of that marinating together, you’ll want to get yourself a container for storage, along with some cheesecloth for straining.Then, being mindful of the heat, take the saucepan off the stove, and slowly pour the contents into your chosen container, straining the large floral elements out of the mixture through your cheesecloth.Though you may be enticed to, do not squeeze the cheesecloth, as that would only assist various particles in finding their way into the finished butter – and that sort of bitter plant taste would only serve as a detriment to the entire concoction. But, other than that, throw that container full of activated butter into the fridge – long enough for it to reach a nice “butter consistency” and then you can use it on, well, anything you’d like.But let’s start with this recipe for Chocolate-Covered Cannabis-Infused Bacon.Checkout Our Latest Marijuana Popcorn Recipe

1 thought on “How To Make Chocolate-Covered Cannabis-Infused Bacon”