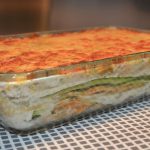 This Marijuana-Infused Zucchini Is Out Of This World!

*To ensure you are giving yourself the correct dosage, please consult our Dosing Calculator located on this page* Hearty and healthy. That sort of combination is harder to attain with a quality meal than many may think. Usually, when one is looking for a more health-conscious dish, they have to sacrifice all of those delicious,calorie-rich elements that would’ve otherwise filled them up with ease. Which,as unfortunate as that is for your taste buds and tummy, is just an inevitable occurrence, especially if you’re on a diet. One of the things we, as humans, enjoy most about hearty dishes is how therapeutic they can be. Which, I understand, may sound silly to some, but it’s abundantly true.SEE ALSO: Strawberry Lemonade There’s something emotionally-calming and soul-comforting about a down home, fulfilling meal. Whatever stress or tension that was plaguing your mental space is gradually eliminated more and more with every bite. But, the downside of these meals is, while they may make you feel great in the moment, over time, they will start to tack on a lot of unnecessary weight. It’s like the old adage goes, “A second on the lips, a lifetime on the hips.”  Which, at the end of the day, is everybody’s choice when it comes to cuisine. Some are more strict with their caloric intake than others,and that’s totally fine. To each their own, as they say. These health-centric human beings have no problem forgoing the delicious aspects of a meal, in favor of some life-enriching fruits and vegetables.  While that may seem like a simple decision to make,it’s far easier said than done.  In fact, I feel like I’d be hard-pressed to find anyone that genuinely thought such a dietary restriction was an “easy” choice. The tasty temptations that surround us in our daily lives are almost insurmountable. That, in concert with the laundry list of reasons we bestow upon ourselves to indulge every now and then,will continue to lead to weight gain. And, with weight gain, comes a litany of other health issues.  So, when you take everything into consideration, I believe it’s all about finding a solid balance between the two.  Yes, it’s immensely important to care about your well-being, and nourish your body with clean, green meals. But, life is too short to forbid yourself from enjoying the tastier parts of life. That said, if there is ever a way you can combine these two culinary goals to create an epically hearty and healthy dish, you should embrace it with open arms, and a hungry belly. Which is precisely why I’m here to teach how to make a dish that will not only fill you up, but it’ll satisfy your body’s cravings for vegetables.  That’s right, party people – today, we’re making Marijuana-Infused Zucchini Lasagna!SEE ALSO: Hazelnut Creme Pre-rollPretty exciting, right? Now, after you’ve successfully wiped away your drool, you should head to the store to pick up the following ingredients: