I feel like every single day, I am waking up to stories about a famous ex-athlete planning to use their fame and fortune to start a cannabis company. Or, at the very least, join forces with one to promote a new line of products. Which, to be completely honest, makes nothing but sense.

I mean, think about it. Every cannabis enthusiast is well aware of the multitude of benefits that this tremendous herb can provide. Not only can it relax the weary mind of the consumer after a long, stressful day, but it can also help the body and muscles recover after a traumatic injury. Let’s face it, if an athlete has ever reached the professional level, chances are their bodies are a battered shell of their former selves by the time retirement comes around.

Which leaves these once Adonis-like creatures withered and in need of some relief. That is where cannabis comes into play. Even though the chances of athletes partaking in marijuana during their off-seasons are fairly high, its usage is routinely frowned upon by every single league in the nation. Which is something that will never make sense to me.

Cannabis, along with its various interpretations and mediums, serve simply as a recovery aide to those in need. It doesn’t help anyone run faster or jump higher – it is merely a different form of medicine that doesn’t have any of the harmful effects that league-approved opioids are known for.

I feel like it won’t be long before these athletic institutions see the error in their ways and start to allow their players to partake in the plant as much as they please. Such a change will only occur if superstar athletes start to speak out about the therapeutic benefits of cannabis, and its effectiveness on the average athlete’s recovery process.

While there has been a handful of football and hockey players to announce their relationships with marijuana, the most recent household name to throw his proverbial hat in the cannabis ring, is none other than world-famous retired boxer, Mike Tyson.

For those of us who were around for the entirety of Iron Mike’s stellar career, we are more than aware of this man’s past. He was constantly surrounded by controversy, and the punishment he delivered to his opponents in the “squared circle” quickly earned him the title of “baddest man on the planet.” The man, for lack of a better term, was out of control. To be honest, he was damn near dangerous.

However, since he has retired, Tyson has admitted that he is no longer the arrogant, mis-managed youngster he used to be. Now a father, Tyson has embraced a more calm, peaceful lifestyle – and he couldn’t be happier about it. When asked how he was able to turn things around in such a drastic way, he routinely attributes his new kind demeanor to marijuana.

His infatuation and admiration for cannabis continued to blossom over the years, and it wasn’t long before he realized it was “high time” (pun intended) to start producing his own line of products. That is exactly what this 53-year-old legend has started to do with the creation of Tyson Ranch.

And even though the name is teetering on the “cute” end of the spectrum, this company is the furthest thing from an adorable joke. Tyson takes his cannabis incredibly seriously, and he is even known to fly from his Vegas home to be in important business meetings that the company holds at their headquarters in El Segundo, California.

When questioned about how “hands-on” Tyson is when it comes to business decisions, the chief operating officer at Tyson Ranch commented, “Show us the lab test…If Mike likes it, we’re selling your product.” There is a whole line of products from this company that are currently available in Nevada and California. The most popular being a charming, lisp-inspired CBD beverage affectionately known as, Dwiink. As well as a powerfully potent indica strain named, The Toad, which clocks in at an impressive 37% THC. 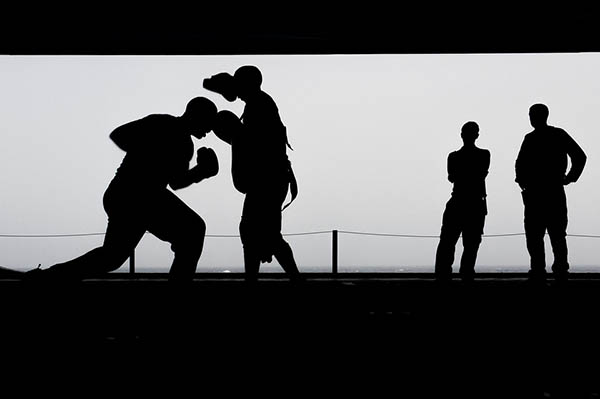 Needless to say, these products are known to deliver “knockouts” just like the Champ, himself.

While athletes like Tyson are beginning to produce and place their names on popular cannabis products, Iron Mike is planning on taking things to the next-level. How so, you ask?

Well, for starters, the wealthy former boxer has already purchased roughly 400 acres in Southern California that he plans to turn into a stoner’s dream destination. Imagine it as a sort of cannabis-infused oasis, a ganja theme park, if you will. Varying activities available will be focused on relaxation and positive vibes. Oh, and a TON of weed!

I don’t know about you, but that sounds like an absolute dream.

Recently, the Champ sat down with WeedMaps to discuss his plans with Tyson Ranch, as well as his personal relationship with cannabis. Just like always, Mike was more than honest with his answers. That upfront demeanor is what has helped him become the lovably charming man he is today.

When asked if he had ever smoked marijuana during his fighting days, he was more than happy to divulge that he had, but after testing positive for cannabis after his victory over Andrew Golota in 2000, his win was changed to a “no contest” per the rules and regulations of the sport. Not only that, but Tyson was forced to pay $250,000 in fines. Which, in my opinion, is total and utter B.S.

Later in the interview with WeedMaps, Tyson was asked to share his opinion on cannabis and athletes. More specifically, if he thought that they should be allowed to partake in the harmless plant. On the matter, Tyson replied, “I think all athletes should smoke marijuana if that’s what they choose to do. I’m not pushing it on anybody. I’m just telling people who are like me, who experience pain from a long career, [to consider] cannabis.” Which is a perfectly reasonable response and approach to cannabis, in general. That thoughtful reply is just another sign of Tyson’s maturity.

The interviewer then asked the former boxing champion if he thought his career path would have been different had cannabis been deemed usable by the “powers that be” in the boxing world.

Tyson didn’t hesitate to respond, saying, “Oh, definitely. I wouldn’t have had as many lawsuits. I wouldn’t have been locked up as many times as I was either. If I had been smoking marijuana instead of taking those pills that made me feel like a zombie, I would have never got into the fights that cost me all of those millions of dollars. I’m talking about street fights and brawls that cost me so much goddamn money. I didn’t even know these people.”

He then spoke on his past experiences with opioids, stating, “I was a user of opiates most of my life. I’m bipolar, I’m tripolar, and I’m manic depressive. I’m all these fucking things. So I took all these pills and I became worse. I became obese, I became a zombie. So I changed my whole life, I started smoking and used no more opiates. I lost 45 pounds. My life turned around and that’s why I’m here talking to you now.”

Tyson concluded the interview with a very poignant take on life. The aged fighter commented, “Life is a continuous fight. We don’t win all the bouts either. Who’s going to win in the end? It’s like a marathon. Do we give up or lay down before we get to that level of the game?” Tyson hopes his line of cannabis products will help others live a more peaceful and healthier lifestyle.