As supporters of kratom research and of gaining a better understanding of this natural botanical, we are also interested in the science of kratom and why it does what it does.


Studies of kratom have varied in what they cover, and much of the science has focused on understanding if kratom or its components can be developed into pharmaceutical treatments. There is, however, one common thing that comes up in every single study.

Mitragynine is one of the primary alkaloids found in Kratom, and it is thought to be the root of nearly every possible effect of this substance. What is mitragynine, and what do we know about how it functions? Let’s take a closer look today.

Mitragynine is an alkaloid, and it is the alkaloid that is found most abundantly in kratom. Kratom leaves contain mitragynine naturally. In dried leaves, the amount of alkaloid concentration found can range from around 0.5 up to around 1.5%.

In this scope of alkaloids, mitragynine makes up for a considerable amount of the alkaloids. Some varieties of kratom see as much as 65% mitragynine in their alkaloid breakdown, while minor alkaloids make up as little as 2%. Other combinations are split between more alkaloids and see a lower amount of mitragynine, around 15%.

The difference in the exact amount of mitragynine in a particular strain of kratom depends on a number of factors:


Mitragynine is thought to be responsible for many of the active effects of kratom, but more studies about it need to be done to be sure of what precisely this compound causes. Additionally, scientists have been studying mitragynine to discover what, if any, pharmaceutical uses it may present. 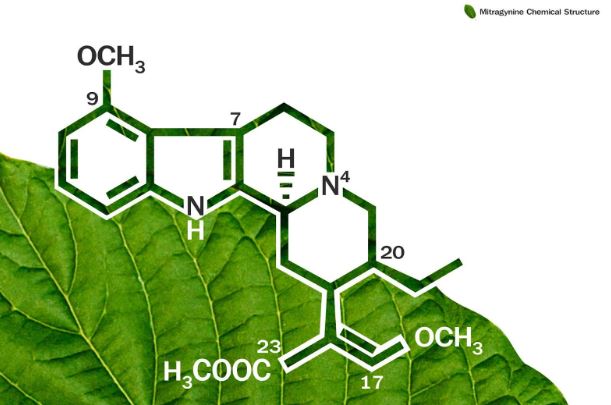 Kratom is the common name for the plant Mitragyna speciosa. This plant, native to parts of Southeast Asia, has been used for a long time by people living in these areas as a traditional treatment for pain, stress, anxiety, and a number of other conditions. Today, it is used worldwide by people that are seeking the potential benefits of the substance. You can primarily buy Kratom online, but it is also found in headshops and gas stations across the US.

Kratom has been studied for its effectiveness in alleviating opioid withdrawal as well as its potential for relieving pain as a substitute for opioids, but these studies are still somewhat limited in their scope.

Ongoing studies are working to address its potential as an anti-inflammatory, anti-depressant, and even as a muscle relaxant.

What Is An Alkaloid?

Using words like “alkaloid” to describe mitragynine is only helpful if we know what an alkaloid actually is.

Alkaloids are typically a derivative of amino acids, but they can also show up in the body as a metabolite when other natural substances are processed.

Alkaloids can have many different effects on the body:

Alkaloids are used in diet ingredients, supplements, pharmaceuticals, medicine, and much more. There are so many different ways that these substances can affect the body, and the full range of how each individual alkaloid acts is still being researched in many cases.

Studies have been done about the various pharmaceutical effects of isolated mitragynine. Many of these effects may also be seen in the use of standard kratom products, but more studies have to be done to determine this ultimately.

The effects of alkaloids such as mitragynine are caused by the compound binding with a specific receptor in the body. In the case of mitragynine, the alkaloid has a high affinity with -opioid receptors, and it acts as an opioid receptor agonist.

The rate of affinity depends on the specific receptor subtypes and how many other competitive opioid binding substances are around.

Additionally, there are other channels and receptors in the body that can be affected by the presence of mitragynine, but these situations need to be studied in more detail to be fully understood.

Administration of mitragynine in some animals has shown that the alkaloid can reduce stress levels. Some believe these effects might be caused by improved neurotransmission of serotonin and similar compounds caused by mitragynine.

Mitragynine compounds can bind with specific receptors and block some channels that affect the body’s ability to reduce inflammation. In the right amount and situation, mitragynine can be considered to be an anti inflammatory agent for these specific effects.

One thing that is often noted in studies about mitragynine is that it presents an interesting combination of both stimulant and relaxant effects. While some users experience mild euphoria or mood improvement from kratom, others only experience a calming sensation along with pain relief.

Ultimately, the reason that mitragynine and other alkaloid compounds in kratom cause different effects for different people needs to be studied further. The strain is likely to cause some of the differences, but there is more to be investigated as well.

Keep this in mind when considering the potential effects of kratom and how you want to continue your own use. It is essential to pay attention to the specific impact that you are experiencing and adjust your usage accordingly.

Kratom: There’s Much More To Know

It is important that more studies are done about kratom and its natural components, such as mitragynine. While we have seen the potential positive benefits of kratom, it will take a long time for kratom to be entirely accepted as a positive natural compound by science if studies are not done.

There is a lot of potential for relief from kratom, and in time, we hope to see those potentials come to fruition!