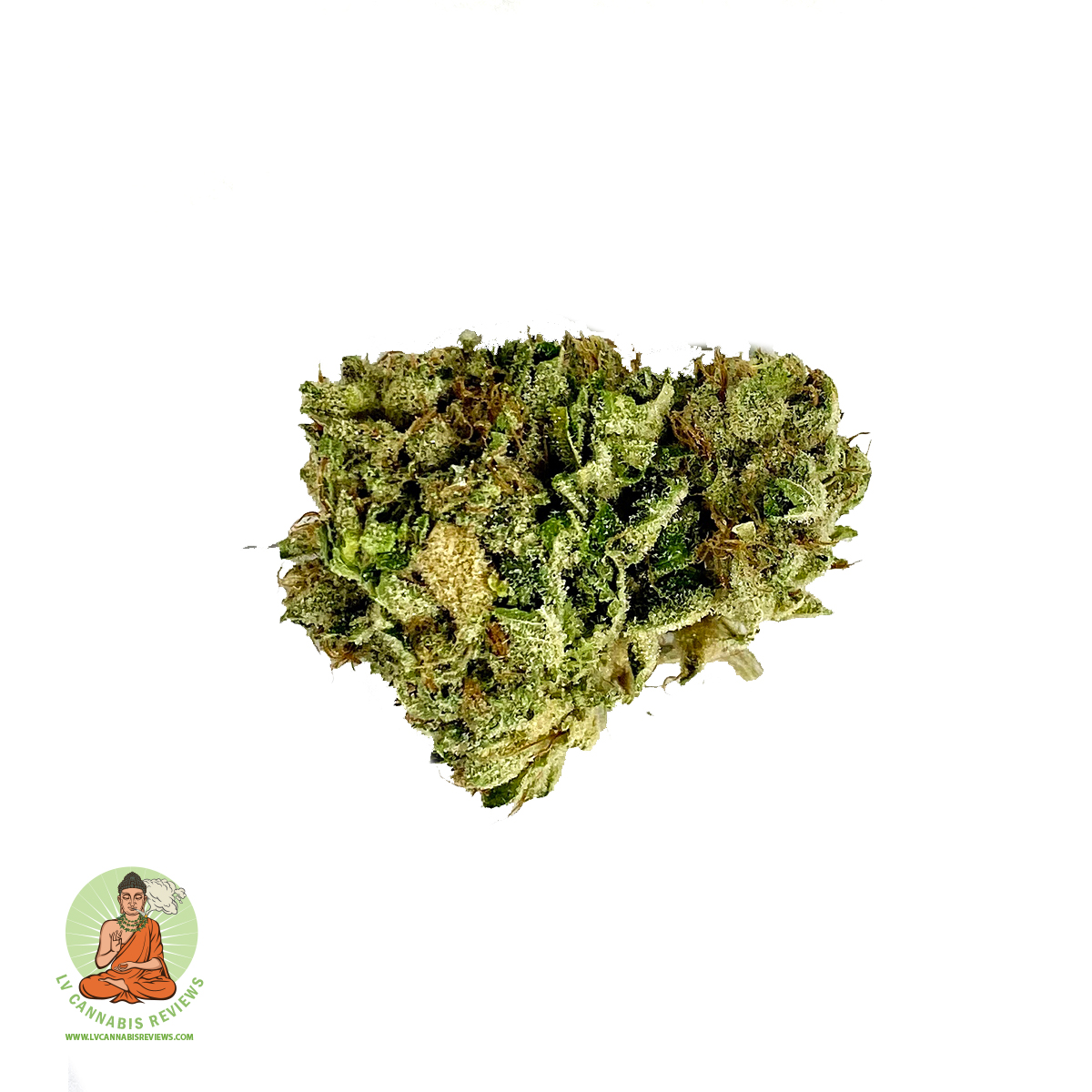 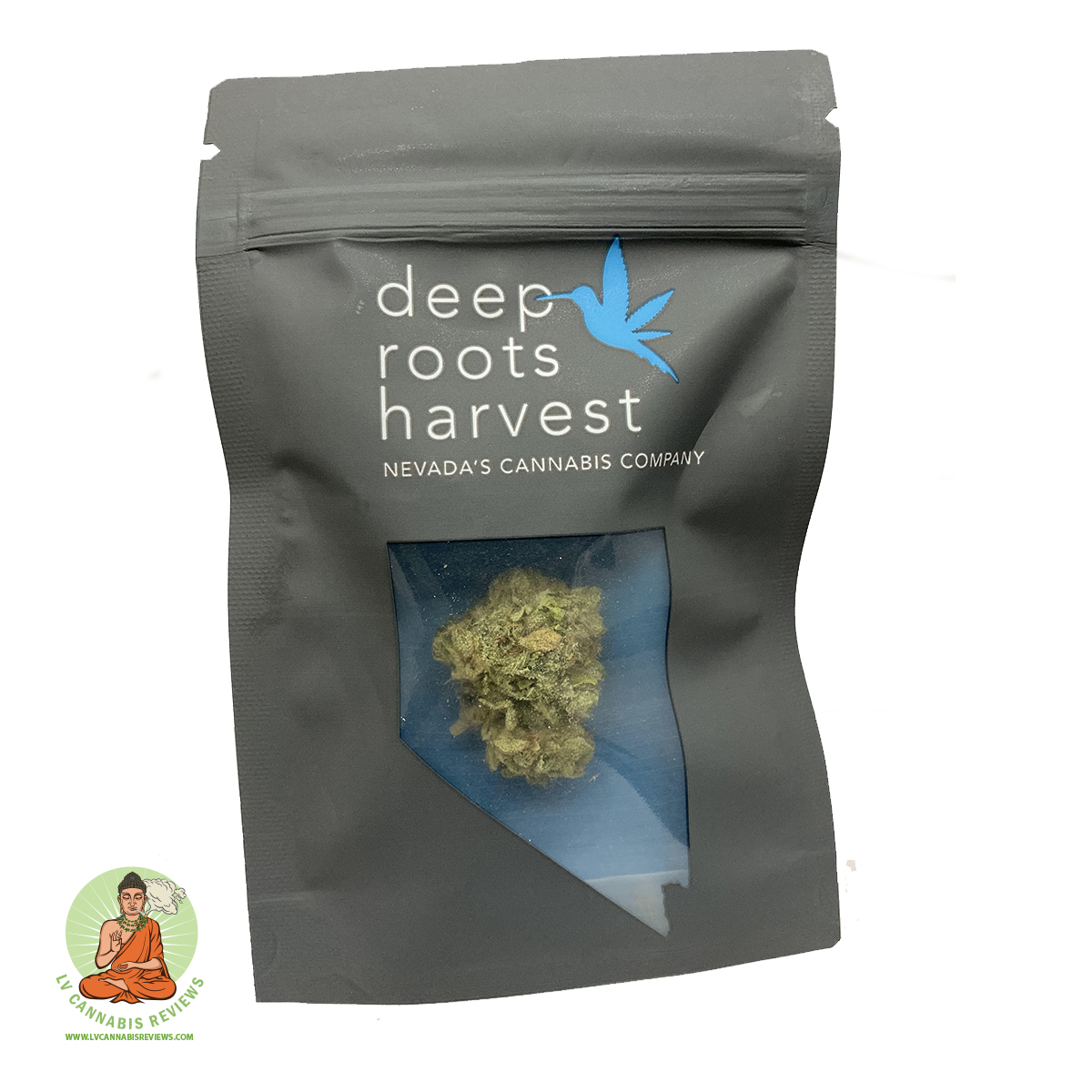 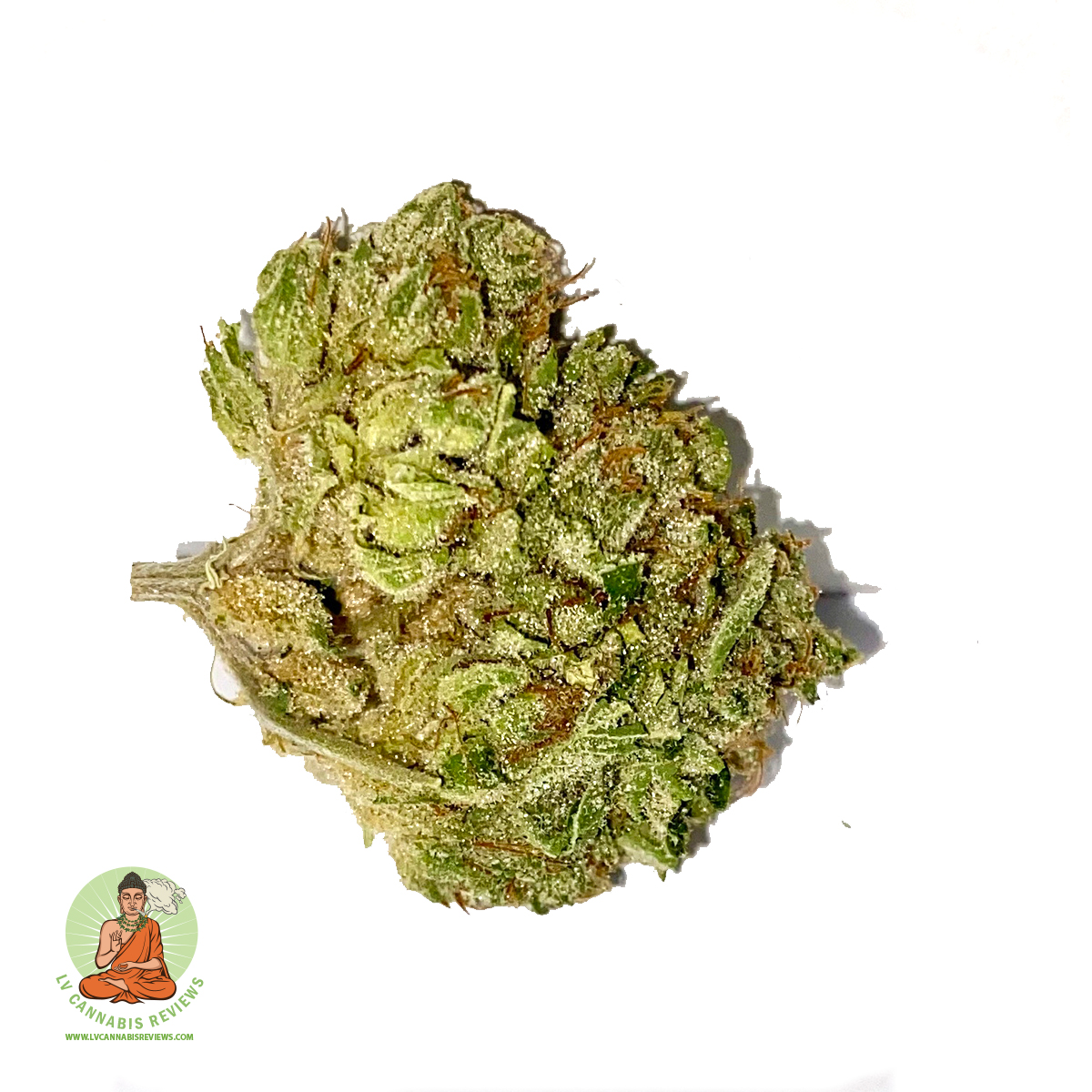 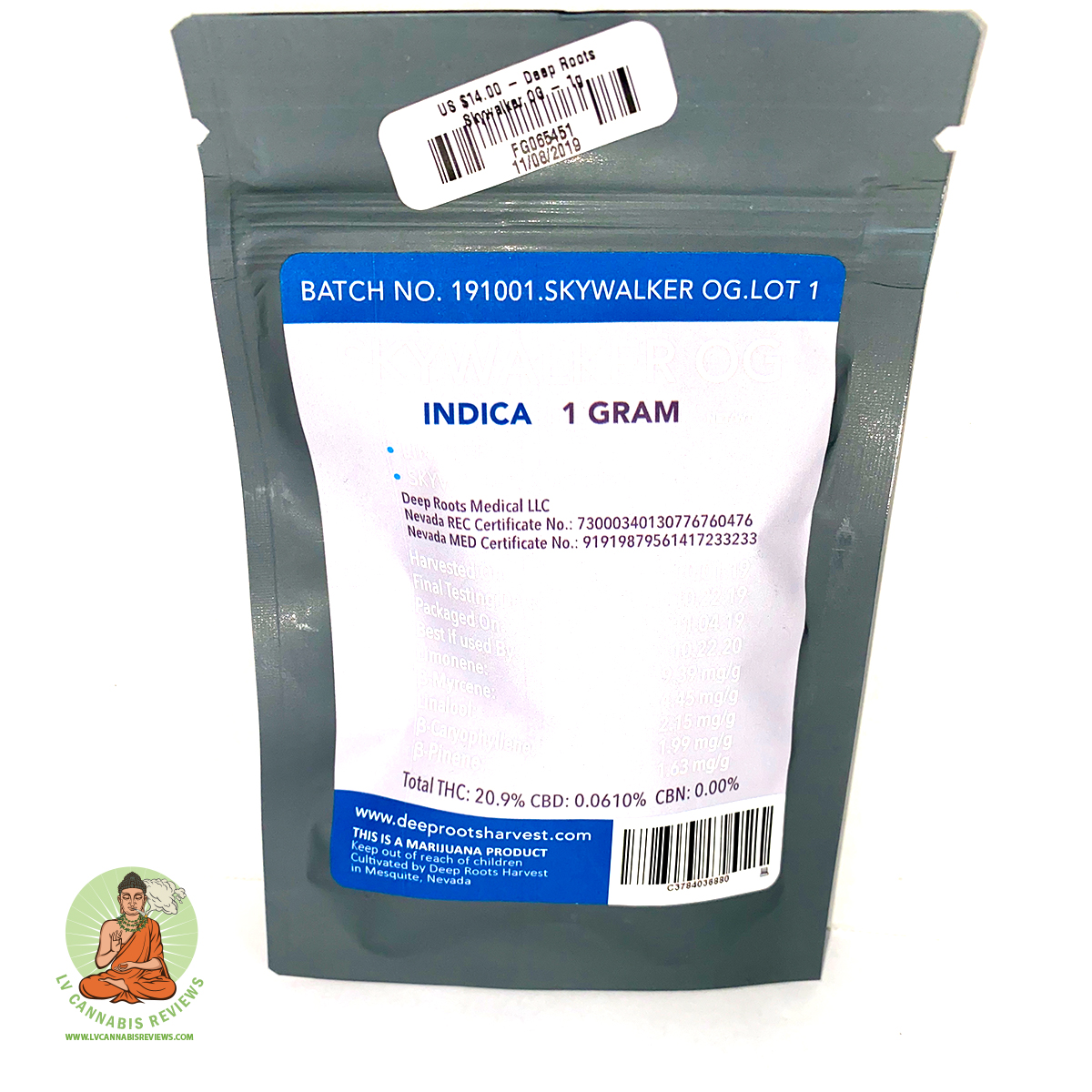 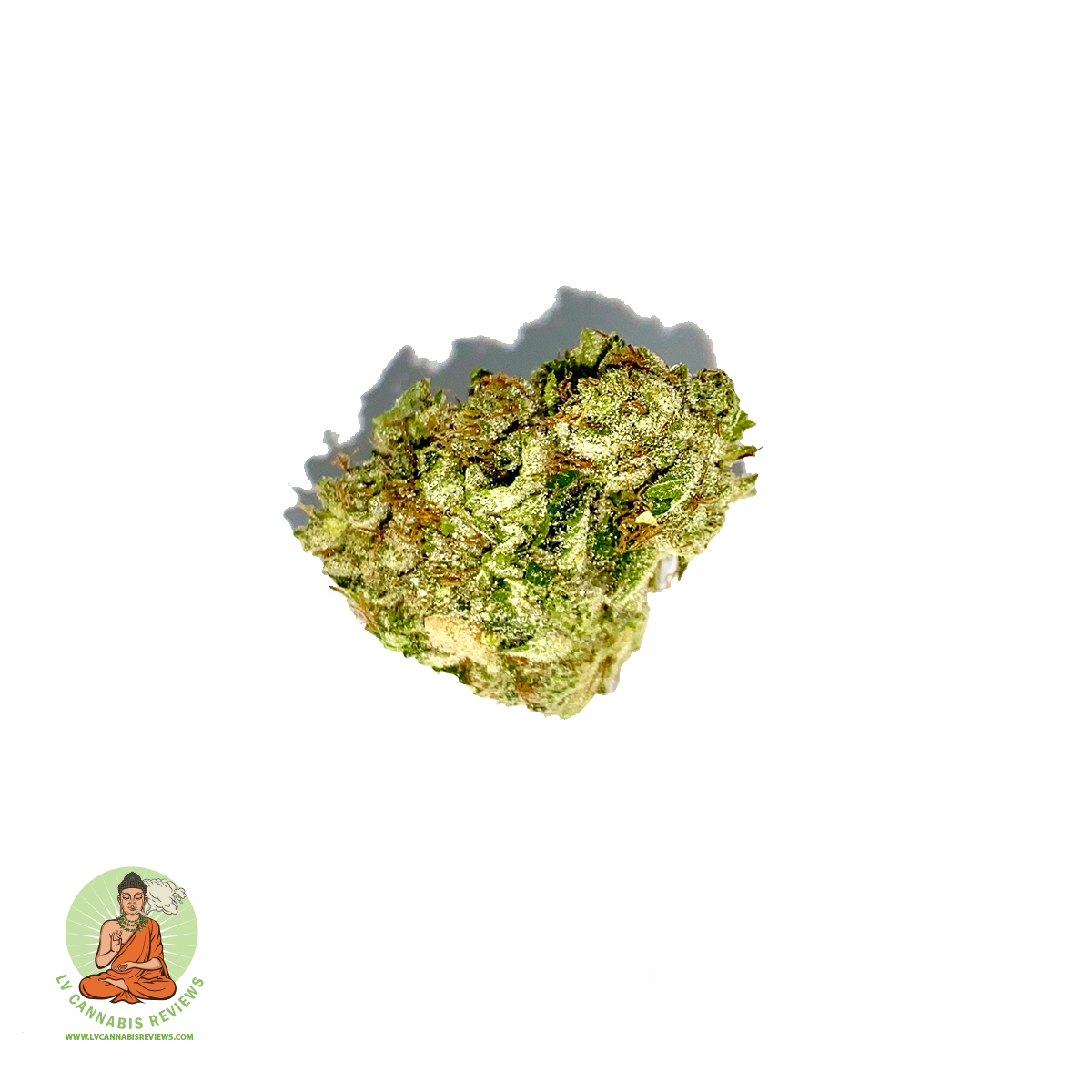 Skywalker OG
is sometimes referred to as Skywalker OG Kush because of its lineage of Skywalker and OG Kush. This pairing of two famed strains could only result in a flavorful and peace bringing strain. Skywalker OG is an indica-dominant hybrid that is prioritized for the nighttime and low energy activities. I’m hoping for blueberry, grape, and gas flavors with and chill high that lulls me to sleep.

Appearance 5/5
One large round fluffy bug shaped like the Death Star weighs a full gram of Skywalker OG.
This is probably the best cannabis packaging I’ve ever seen in my experience shopping at a dispensary. I’m impressed by the ziploc grey bag because of the wealth of knowledge provided. Deep Roots Harvest illustrates Skywalker OG’s lineage, harvest date, and an extensive terpene profile.
Firstly, I notice the shine of the trichomes adding to the appeal of the beautiful bud. A few short, spiky tawny pistils peak out from juniper sugar leaves. The calyx are a very light chartreuse green. The calyx has so many trichomes, especially on the underside, that they appear creamy white.
A glazed donut in weed form.

Aroma 5/5
I separated the ziploc style seal and immediately released the funky and fruity flavors of Skywalker OG.
Something about the aroma reminds me of pine sol or Febreeze. The chemical notes most likely come from it’s OG Kush lineage. Moreover, I can sense the iconic OG pine and gasoline tones that are truly fire.
I recognize citrus fruits such as orange and tangerine. In the same way, I sense other sweet flavors like berry and grape.

Taste 5/5
I grind up the cannabis and throw it in the bowl. First, it was piney and herbal and then developed into fruity flavors. The taste ended with some funky cheese taste.
Deep Roots Harvest Skywalker OG is bursting with fruit flavors. The saccharine flavors offer a multitude of fruit flavors like a fruit punch.
My taste buds detect chai spices and lavender.
I even taste jolly ranchers. The flavor hits me with some fresh herbal tones that remind me of mint in the beginning.
The flavor was delicious and provided a long spectrum of diverse saccharine flavors.

Effect 5/5
Only two puffs and I begin to feel my body drift into euphoria. I am thoroughly faded, baked, and sedated. In other words, it’s nap time.
The high impairs my mental state, and it’s challenging to concentrate on writing this description. My short term memory is severely impaired.
Thank goodness I ate before because the munchies kicked in hardcore.
Billie Jean is not my lover, I chose Mary Jane, not another. I’m faded like blue jeans, I’m higher than an eagle’s nest or Kanye West’s ego.

There is no way in hell that a beginner should smoke this weed unless they plan on sleeping in for the next 24 hours. Deep Roots Harvest Skywalker OG displays the most stereotypical traits of cannabis indica in powerful fashion. One may experience pain relief, increased hunger, sleepiness, positivity, and peace after enjoying some of this flower. I recommend this strain for the nighttime because of its sedative characteristics.

There are so many factors indicating that Skywalker OG would deliver an unforgettable high. The lineage of Skywalker and OG Kush, for example. Likewise, the 20.9% THC and the presence of CBD promise an encompassing euphoric high. Not to mention, the diverse fruity, herbal, and spicy terpene profile. Waking in the Clouds like an OG, living comfy, is the best way to describe m after puffing these fluffy indica buddies.

MedMen
This Wednesday morning was my earliest Medmen visit yet! When I arrived, the dispensary had been dealing the green for only 20 minutes. Maybe I would have arrived when the doors first opened if it were not for the debilitating construction on MedMen’s block of Third Street. I smoothly executed the check-in protocol by having my driver’s license prepared to display to the check-in receptionist. There was only one other guest in the dispensary this morning. Thus I received plenty of attention. I entered the dispensary space on the door to the left and was greeted by the affable budtender, Christina. We exchanged pleasantries about the lovely weather. The weather has been atrociously frigid for Las Vegas this December. Yet this morning, there was a cool breeze bathed in sunlight and made my stroll pleasant.

During my conversation with Christina, I felt the force calling me. I felt an undeniable vibration in the universe, summoning me to fulfill my purpose and finally acquire the mythic Jedi strain. Christina confirmed that MedMen had my desired product: a gram of Skywalker OG produced by NLVO. Christina shared with me that she normally tastes grape flavors when she enjoys Skywalker OG. I’m always impressed when I can talk with a budtender that not only has a dank attitude but also has experience and can give an honest opinion about the weed I want. I only paid $14.00 for my gram of Skywalker OG and the price was so affordable I forget to use my $5.00 in loyalty points!