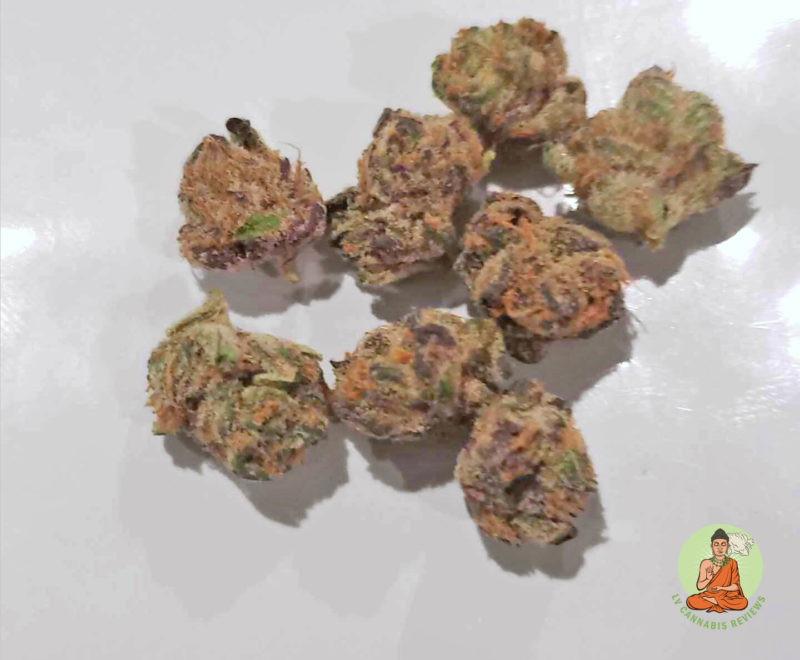 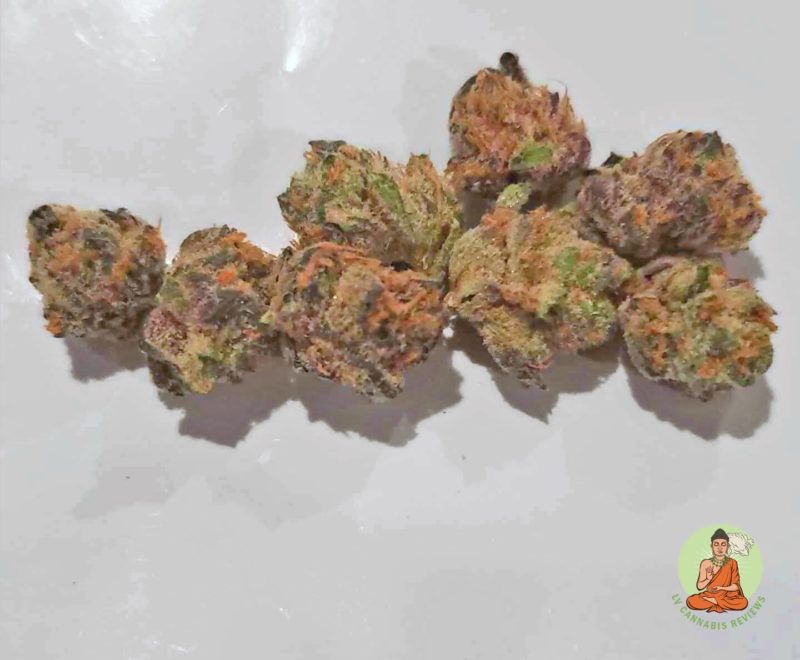 When I first got a whiff of GSC, the first scent that clicked in my mind was more floral than earthy, but still distinctly earthy with musky undertones - kind of like smelling a freshly planted flower just a half foot above freshly turned soil. As I took the small nugs into my hand and pinched one between my fingers, I noticed that the nug wasn’t particularly sticky nor dense. Looking at it, I admired the well-formed, bracts and nicely trimmed leaves. The kief coating covered almost everything with a less-than-even coat punctuated by bright orange stigmas sticking out. Prior to this gram of GSC, I hadn’t had a cookie strain in over a year. I was particularly excited as I put the nugs in the grinder and ground them up. Once ground up, I could see more color in the bud - including some purples and light greens.

I rolled up a joint and eagerly lit it. The first few hits left me incrementally higher and with a more relaxed body and racier mind. By the end of the joint, I had already started thinking about ridiculous scenarios instead of how sore my shoulder was from sleeping on it funny the previous night. A former cop once told me that the only way to be prepared for a scenario, besides living through it once before, is to play through it step by step in your head. That way, you know what you are supposed to do even if you have never done it before. Well, thanks to a GSC-inspired thought train, I now know the general gist of attempting to guerilla market a book about ancient religions in my self-owned bookstore that I don’t currently own or ever plan on owning. Don’t be surprised by these types of random mind quests that will appear when you are high on GSC - just roll with it.

Thirty minutes in, I noticed that I didn’t feel as much of a head high anymore even though my body still felt a buzz. I had come down a little, but still had a ways to go. I began to realize that maybe my bookstore related ideas weren’t going to come to fruition, so I decided to focus on a more immediate task: dinner. Despite GSC being a hybrid, my appetite wasn’t particularly amplified by the high. However, once I started eating, the deliciousness of the food encouraged me to continue. I didn’t end up overeating, but I did take longer to eat because I was savoring each bite. Over an hour had passed by the time I had finished eating, and I still felt sufficiently high - quite the accomplishment for marijuana with a THC percentage in the teens and a testament to the genetic goldmine that was discovered with the creation of the GSC strain along with its offspring.

Girl Scout Cookies is the perfectly blended hybrid strain that gives you an equal part head high and body high. With a proper mix of head and body high comes the holy grail of medicinal marijuana use: pain relief. You either forget about the pain while thinking fantastic thoughts or the body high causes the pain to go away; either way, GSC is a great all-around strain to introduce people to before getting into the various nuances of sativas and indicas.

If you are on the southwest side of Las Vegas, there is a good chance that The Apothecarium is the closest dispensary to you. Sometimes I go and there is no line; sometimes I go and it is a full house. It is interesting - some people are not interested in talking with their fellow shoppers at all - others are more than happy to swap recommendations. For those that don’t ever go further east than Decatur, The Apothecarium could be your spot. Parking at The Apothecarium is always available, but if the neighboring businesses are busy, you may have to walk in the scorching sun because it is shared parking. It is worth it.

When you walk in, you are immediately told to sign in. Ergonomic looking black chairs line the wall for you to sit in while you wait. Once your name is called, you are given a dedicated cannabis connoisseur to help with your purchase. I have found that visits to this dispensary can end up taking longer than anticipated. Sometimes, there are just too many people ahead of you. In those situations, you can order for pickup and cut the line - so to speak. Other times, you just end up talking to the knowledgeable staff about marijuana for way longer than either of you thought you would.

One thing that I have found that sets The Apothecarium apart from other dispensaries is that they do accept debit cards alongside cash. These debit card transactions will show up as an ATM withdrawal on your bank statement and it is best to think of it as a quicker method of getting in and out. Funny tidbit - because an ATM withdrawal transaction needs to be entered in increments of five, the difference between what you are charged and what you owe will be given to you as cash back. The Apothecarium also has a rewards program that gives you 1 point for each dollar you spend. Collect 1000 points and you will get a straight 25% off discount on your order.