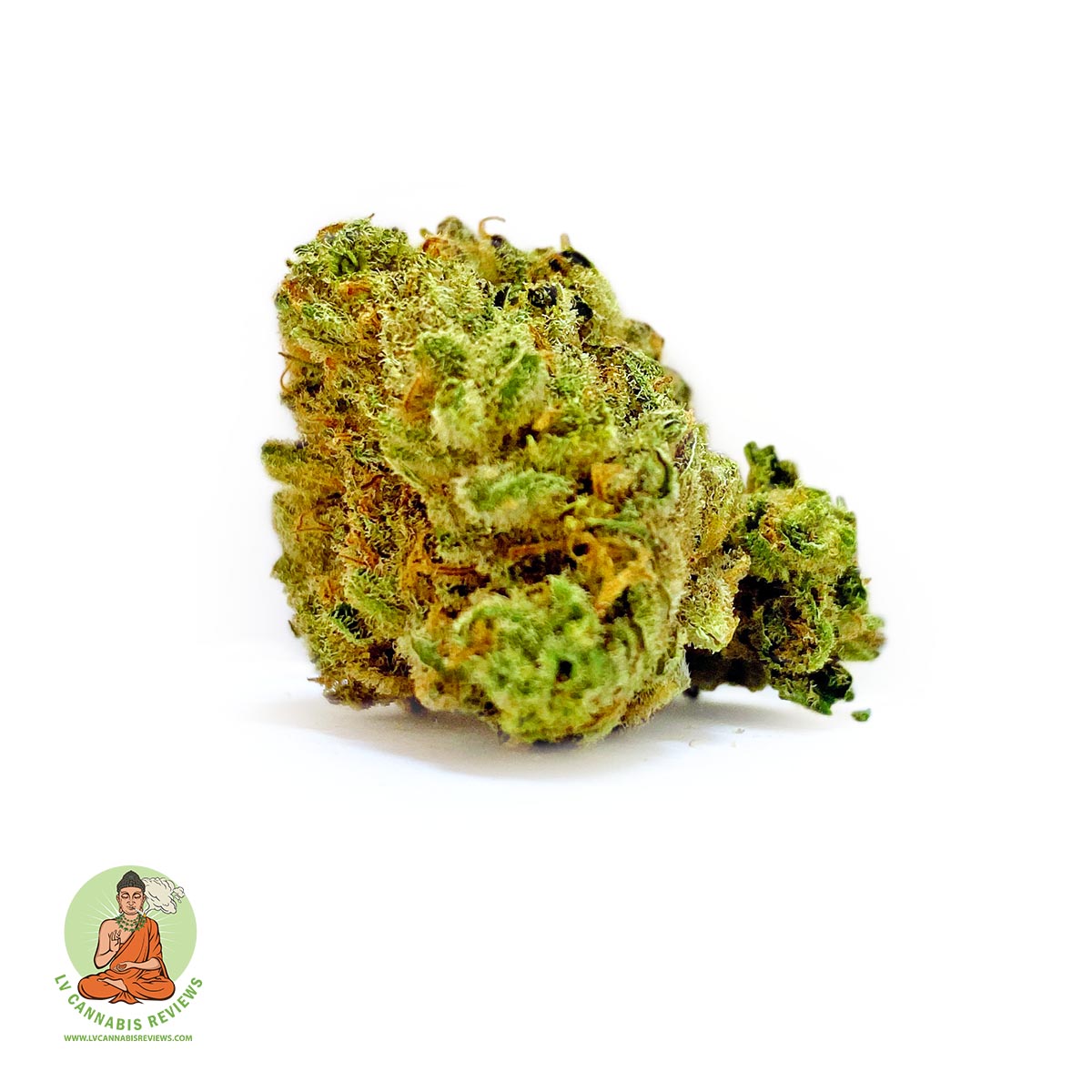 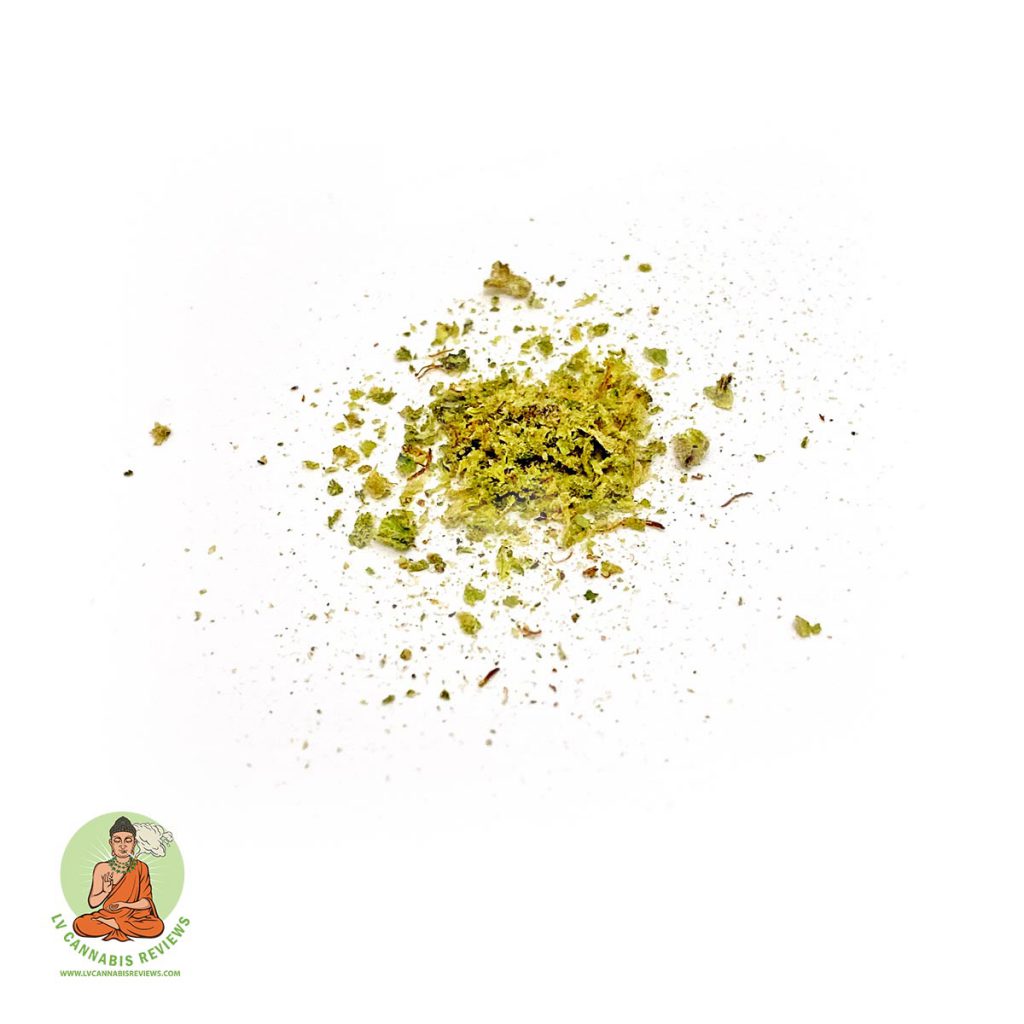 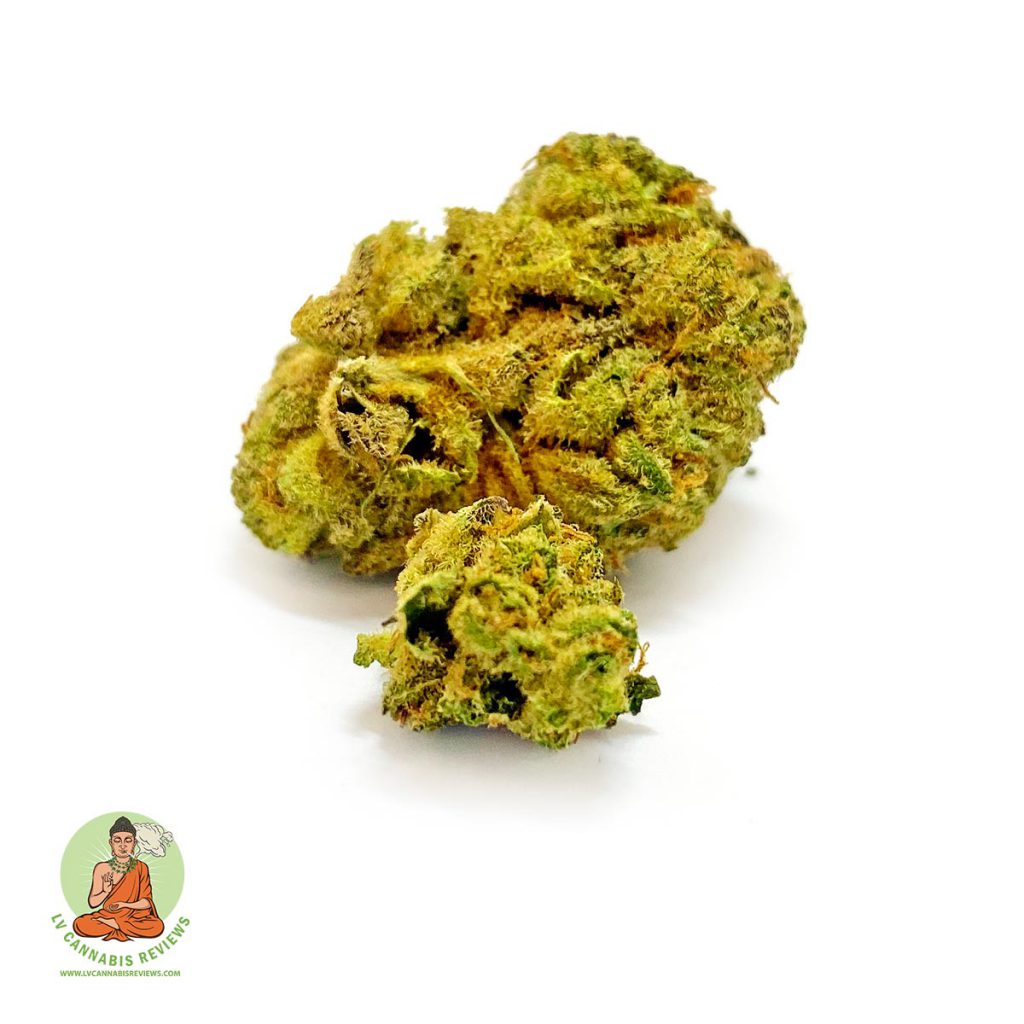 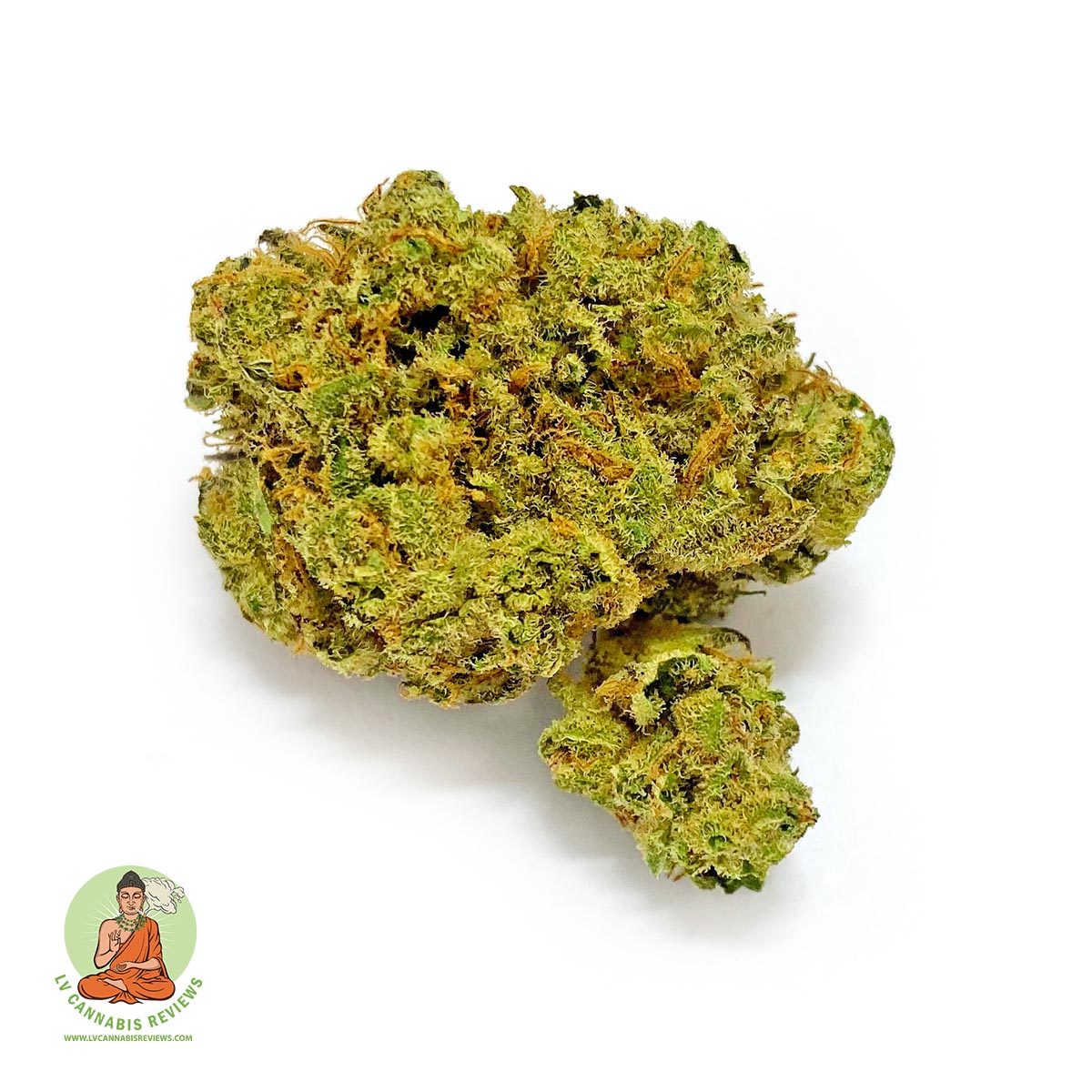 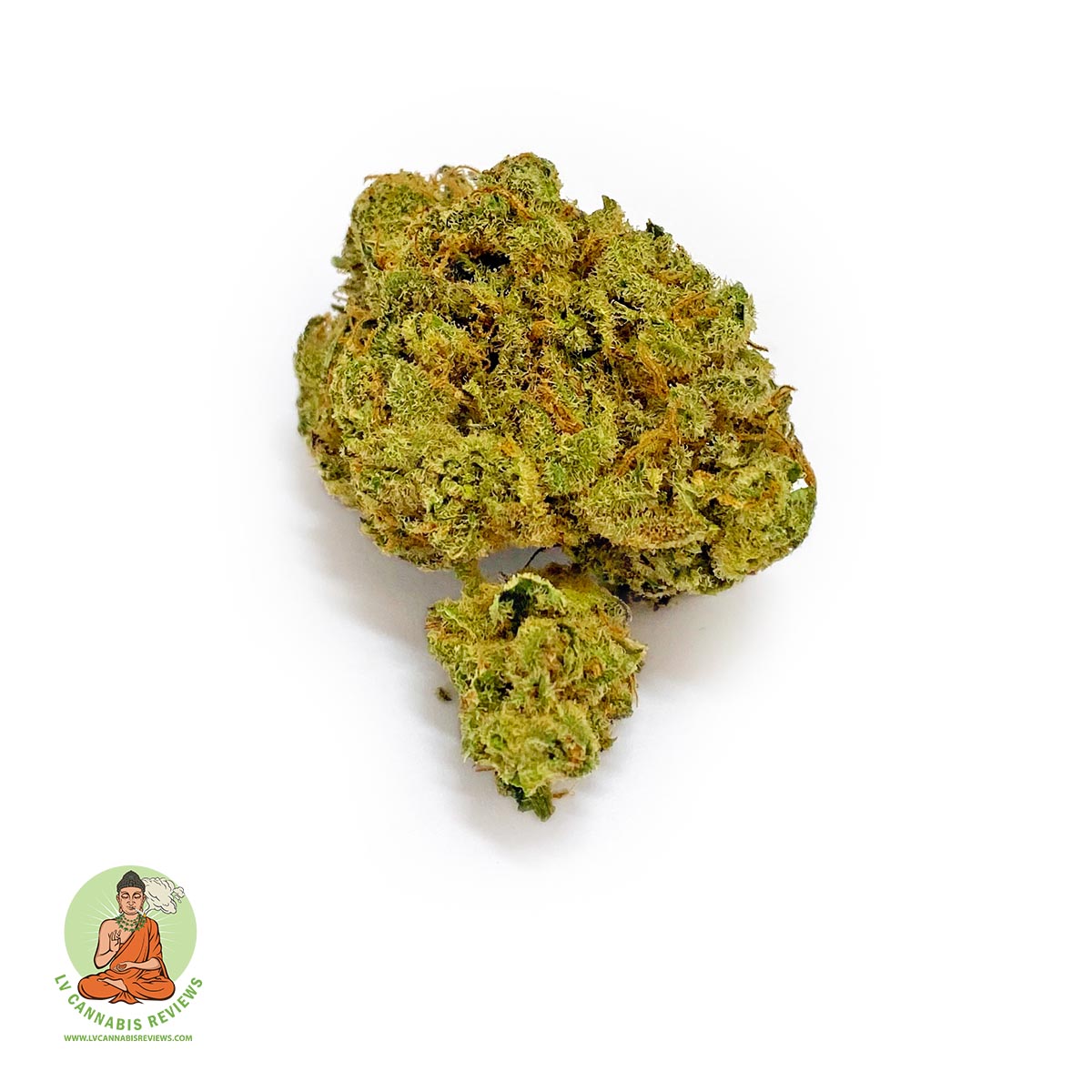 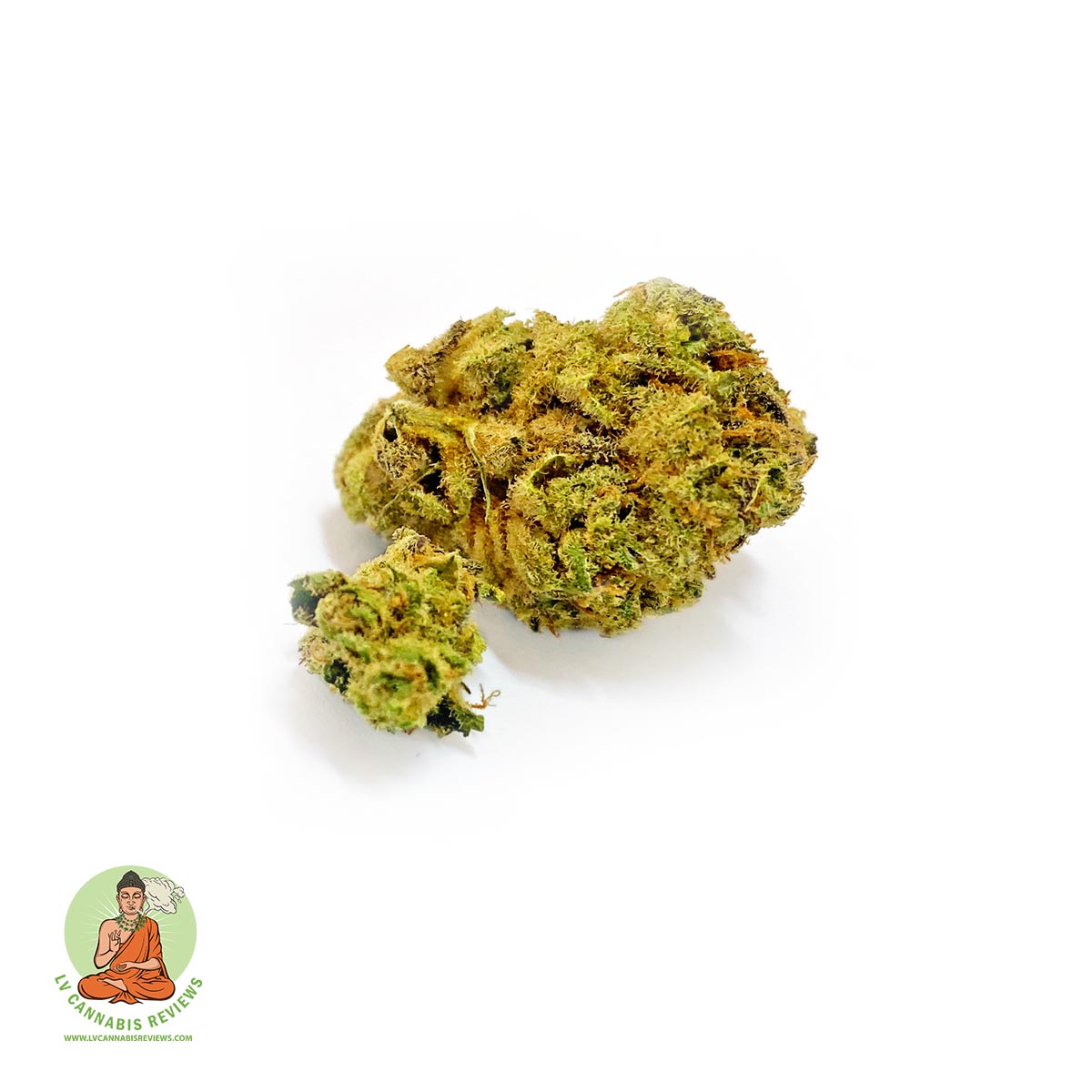 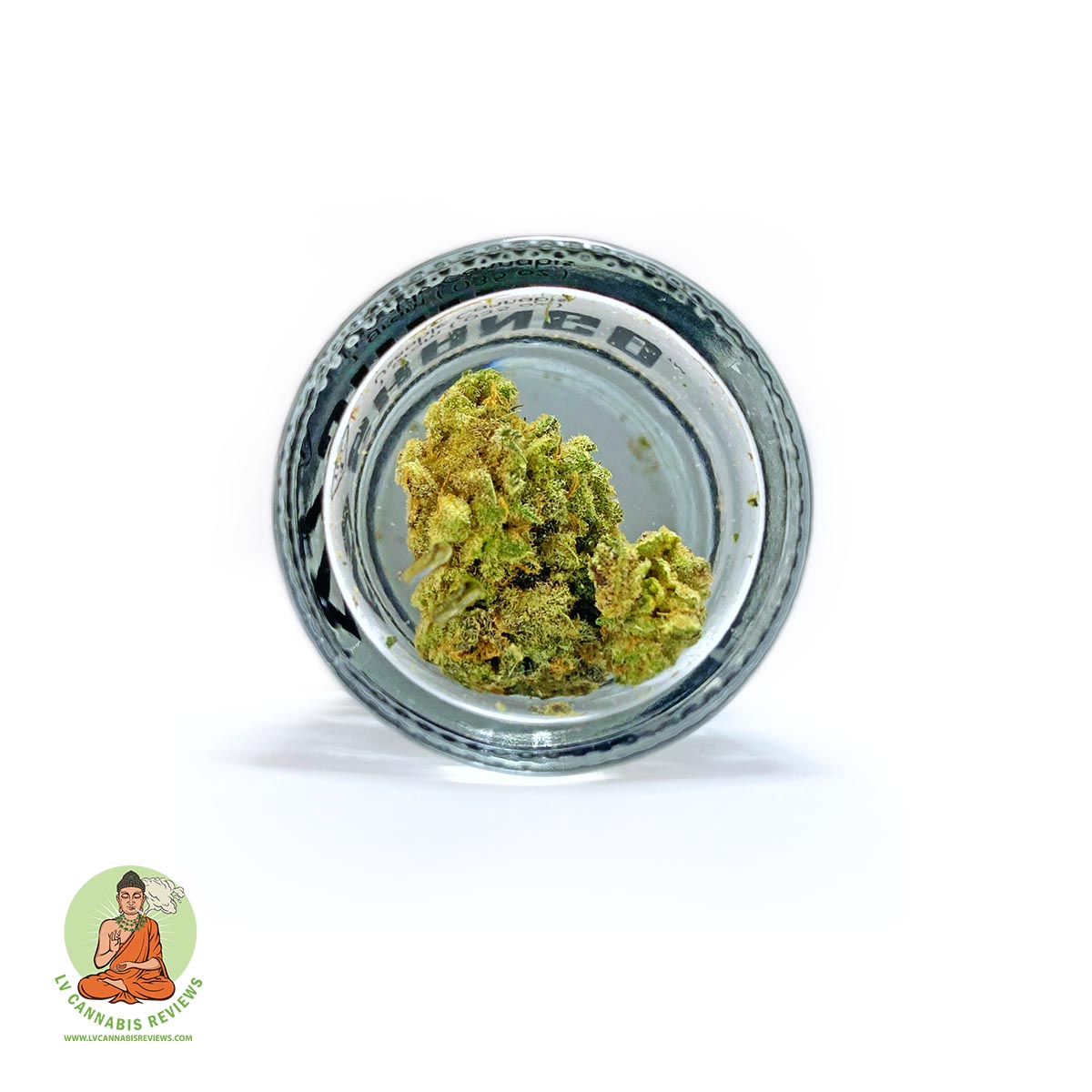 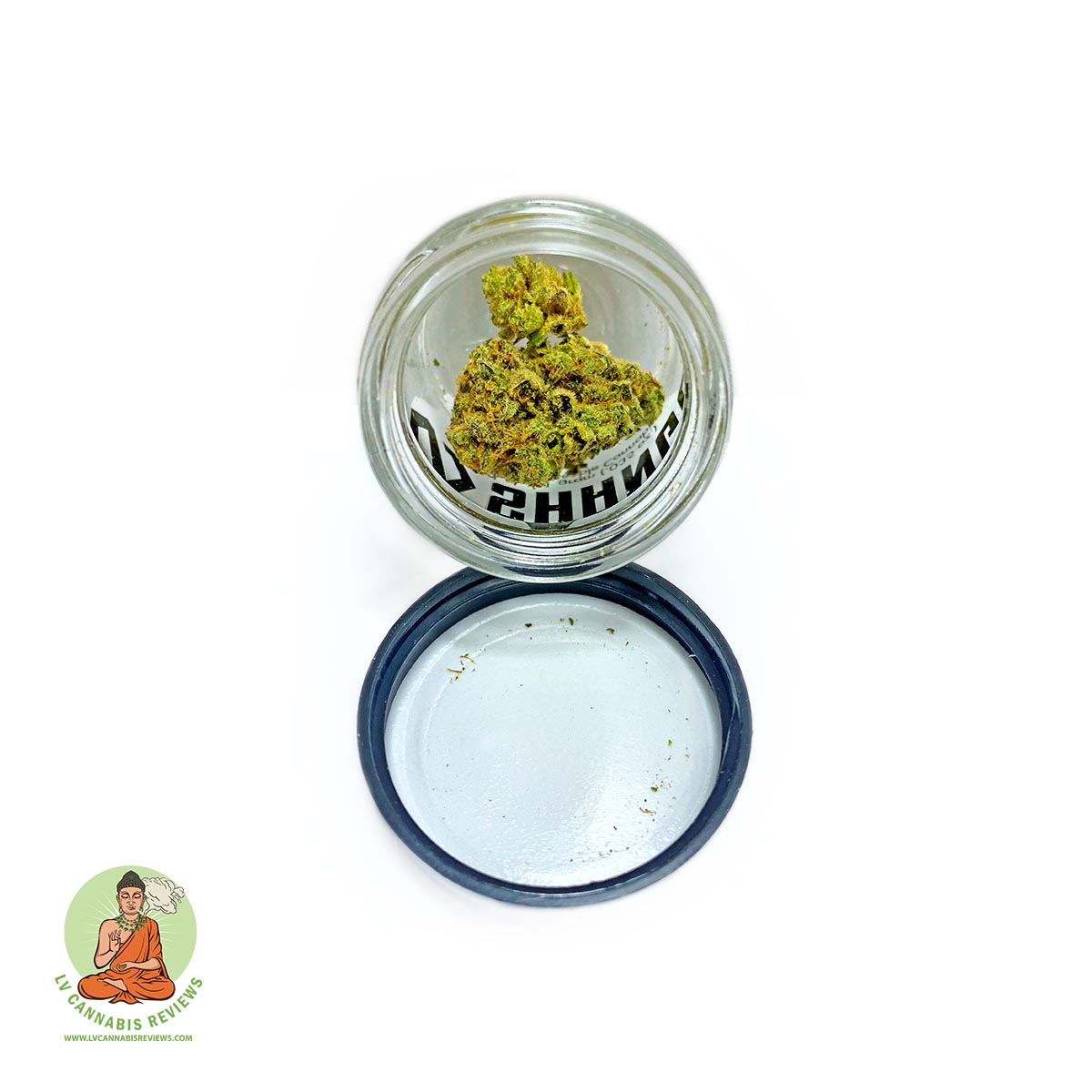 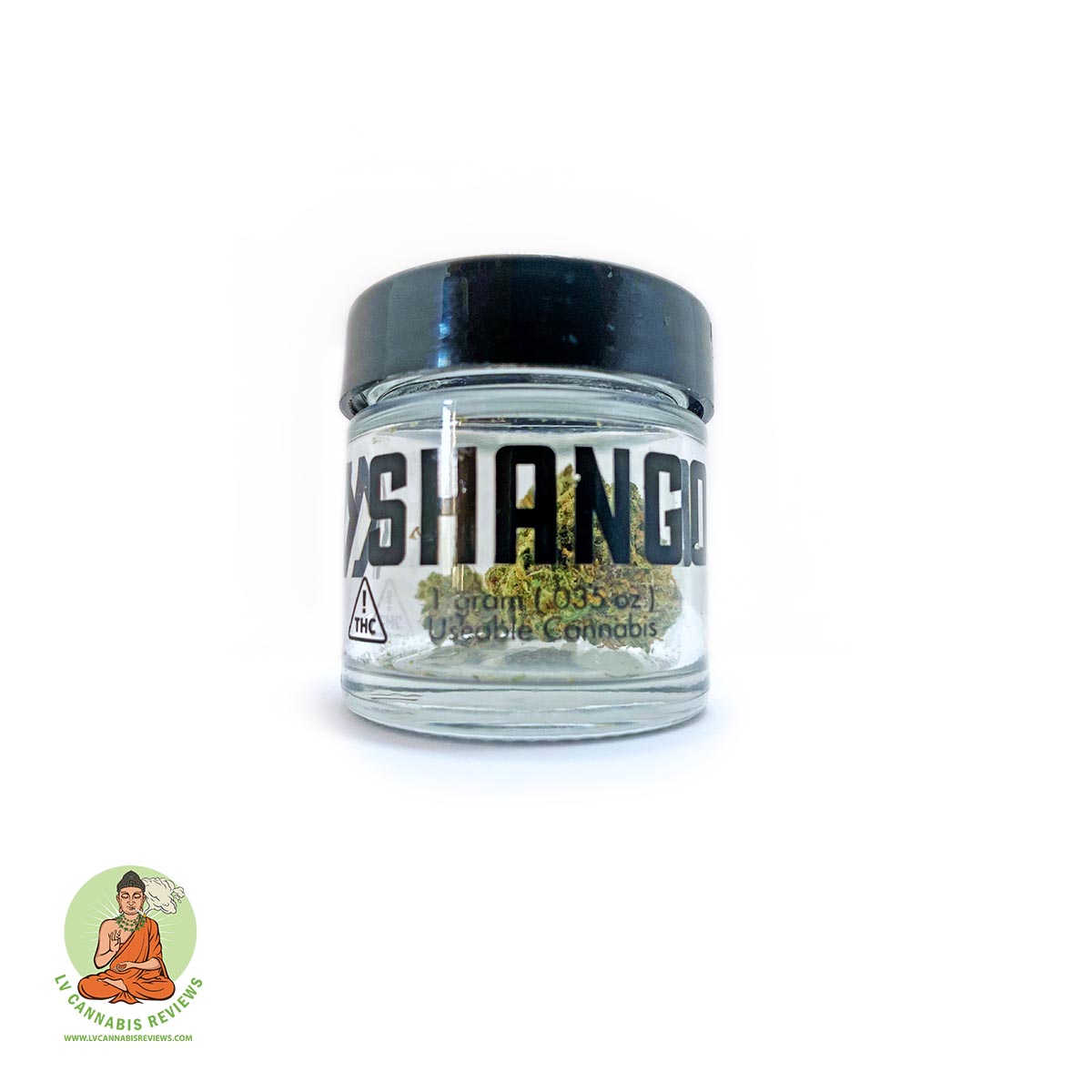 Orange Haze is similar to Super Lemon Haze, as it is a sativa-dominant hybrid boasting bold citrus qualities. Energy, creativity, and focus are three potential benefits often reported from users of Orange Haze. Although this strain is cerebrally stimulating, it may also give users sharp hunger pains and physical tension.

Appearance 4/5
A durable glass jar holds my beautiful gram of SLH x OH x MAC flower. My Las Vegas Releaf budtender, Austin, placed a label with the test lab results on the back of the container. Without this, relevant cannabinoid and terpene information would not have been provided.
One giant fluffy nug and a miniature equally fuzzy nug weigh a full gram of SLH x OH x MAC. The generous trichomes gathered on the flower are easy to view at first glance. The shiny trichomes are more concentrated on the underside of the buds and inside the flower.
The chartreuse green of the calyx is gifted an orange glow from the combination of rusty wispy pistils and trichome particles on the sugar leaves.

Aroma 4/5
The lemon and orange words in the title of Shango's SLH x OA x MAC flower caused me to anticipate a citrus profile. But the first scents to reach my nose are that of a refreshing garden growing flowers and fruit. I can smell soil, honey, and herbs when I smell the weed in the jar. That I am greeted with these floral notes is because the majority of SLH x OA x MAC terpene profile is terpinolene.

Taste 4/5
The first hit went down like this: As I inhale, I am first exposed to spicy flavors that smoothly transition into earthy and herbal notes. The lemon, orange, and lime notes appear and rush in over my taste buds quickly after the bittersweet terpinolene notes fade away. After I have gathered the vapors from my initial pull of SLH x OH x MAC and the smoke finally escapes my mouth, sharp pine tree flavors are expressed and linger on my tongue.

Effect 5/5
I pack my reliable hypnotic bowl with nearly half a gram of the chronic SLH x OH x MAC flower and begin the smoke session. After four hits of the hybrid flower from the bowl, I began to feel the cerebral effects come upon me rapidly. My focus immensely increases, and I find myself absorbed into Jojo's Bizarre Adventure, one of my top five favorite animes. The sedating effects of SLH x OH x MAC arrive much later than the uplift from the sativa but are just as potent. I am hit by a wave of calmness that splashes me on to the shores of nirvana.

Shango expertly assembles Super Lemon Haze, Orange Haze, and Miracle Alien Cookies to produce a quintessential hybrid. Super Lemon Haze and Orange Haze provide the majority of limonene. Limonene can combat depression and offers tangy fruit flavor and aroma. While Miracle Alien Cookies most likely contributes to the chill mode activation from this strain. Las Vegas Releaf is becoming one of my most frequented dispensaries because of its unique offering of cannabis products.

I've only visited Las Vegas Releaf dispensary in the evening. Still, I'm willing to wager that the area is noisy no matter the time of day because of its location on the busy corner of Sahara and Paradise on the Las Vegas Strip. When I pull up to Las Vegas Releaf, I'm greeted by the smell of submarine deli sandwiches instead of the loud stench of weed. This is because Subway Deli shares the same building as Las Vegas Releaf. The name for both brands is visible on the facility, but the majority of the building's appearance is dispensary themed. Green and Pink glowing squares flash in constant alternating order and are the same colors used for the Las Vegas Releaf logo. There is no shortage of munchies in the area as when you exit the Las Vegas Releaf dispensary, you will be staring directly at a rare McDonald's that actually has golden arches. Because of Las Vegas' Releaf's proximity to fast food, I entered the wrong door on my first visit. I learned from my past experience and went to the correct entry door to the right of Subway with the intention to press the door buzzer. Before my index finger could reach the button, the security guard stationed outside held the door open for me, and allowed me to enter first.

On this night, the receptionist had a friendly and positive attitude. He even used the words "please" and "thank you." This was a pleasant surprise considering the lack of hospitality I received on my inaugural visit. Furthermore, the waiting lobby receptionist actually engaged me in conversation and offered assistance. Compared to my last visit to Las Vegas Releaf I felt I was receiving the royal treatment from the front of house staff. The staff in the lobby gave me a dispensary menu to peruse while I waited and kindly asked that I return it before my exit.

I finally entered the retail space and was summoned to the counter by Austin the budtender. On this visit, I sought SLH x OH x MAC produced by Shango. It impressed me that Austin had experience consuming the strain and was able to answer all my questions. He revealed that the hybrid strain was not pronounced, "Slhohmac", but instead a cross of three different strains: Super Lemon Haze, Orange Haze, and Miracle Alien Cookies.