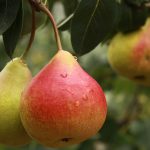 In order to properly nail this recipe for a Pot Pear Treat in the comfort of your own cannabis kitchen, you’ll first need to get your mitts on the following critical ingredients.

*To ensure you are giving yourself the correct dosage, please consult our Dosing Calculator located on this page* Am I the only person who feels like pears are slightly underappreciated? I mean, sure, you'll see people talk about their admiration for this oblong delight, but you don’t see a ton of recipes that include it as a main ingredient. Personally, I find that to be a culinary travesty, and it’s that minor outrage that led me to this recipe for a Pot Pear Treat. It’s delicious, easy to create, and sincerely serene with its series of therapeutic, THC-powered effects.
Calories: 746kcal
Cost: Approx. $20+

The only thing left to do now, is pick out your favorite one, and start eating. And that’s how you make a phenomenal Pot Pear Treat like a pro! Suggested Strains: Maui Wowie (SD)