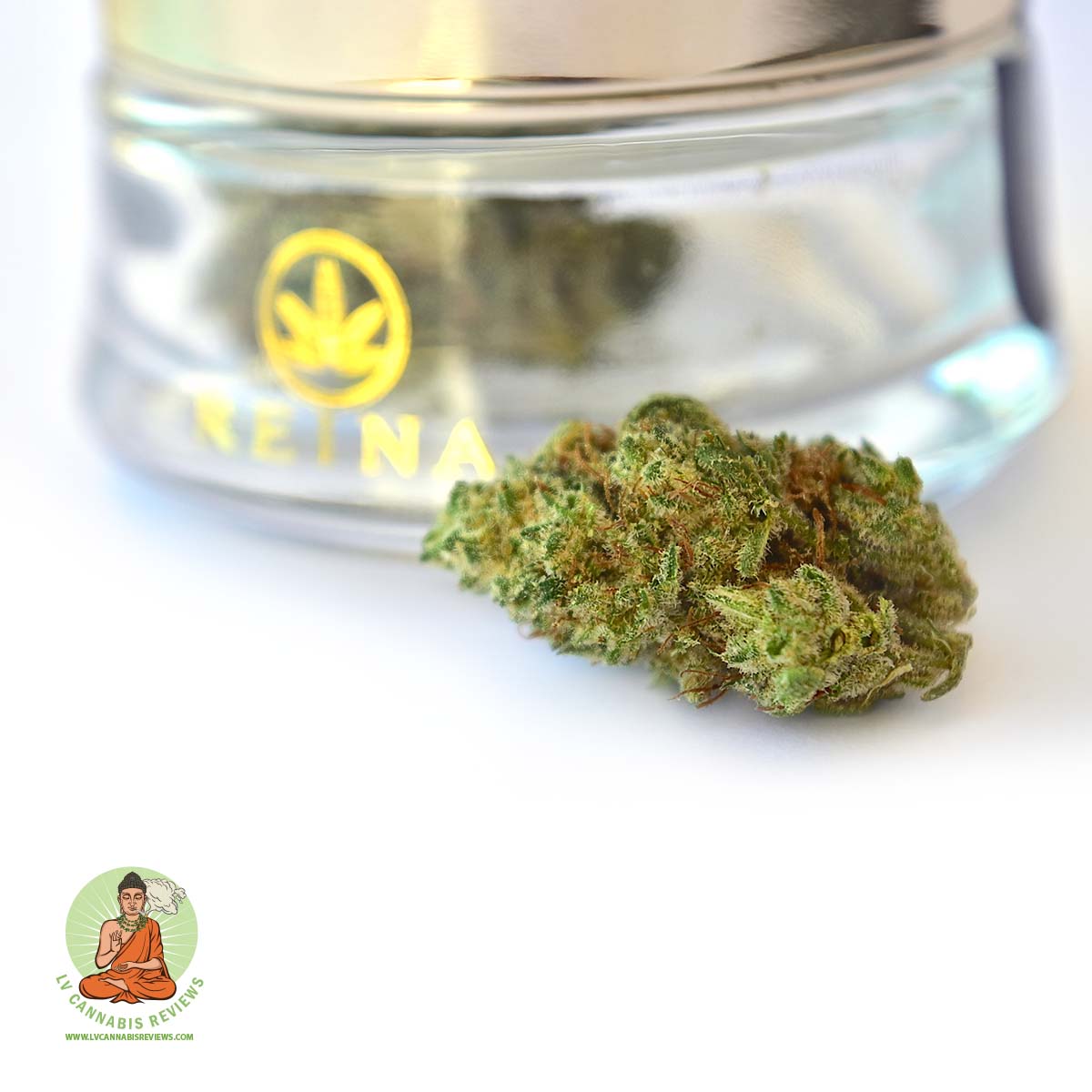 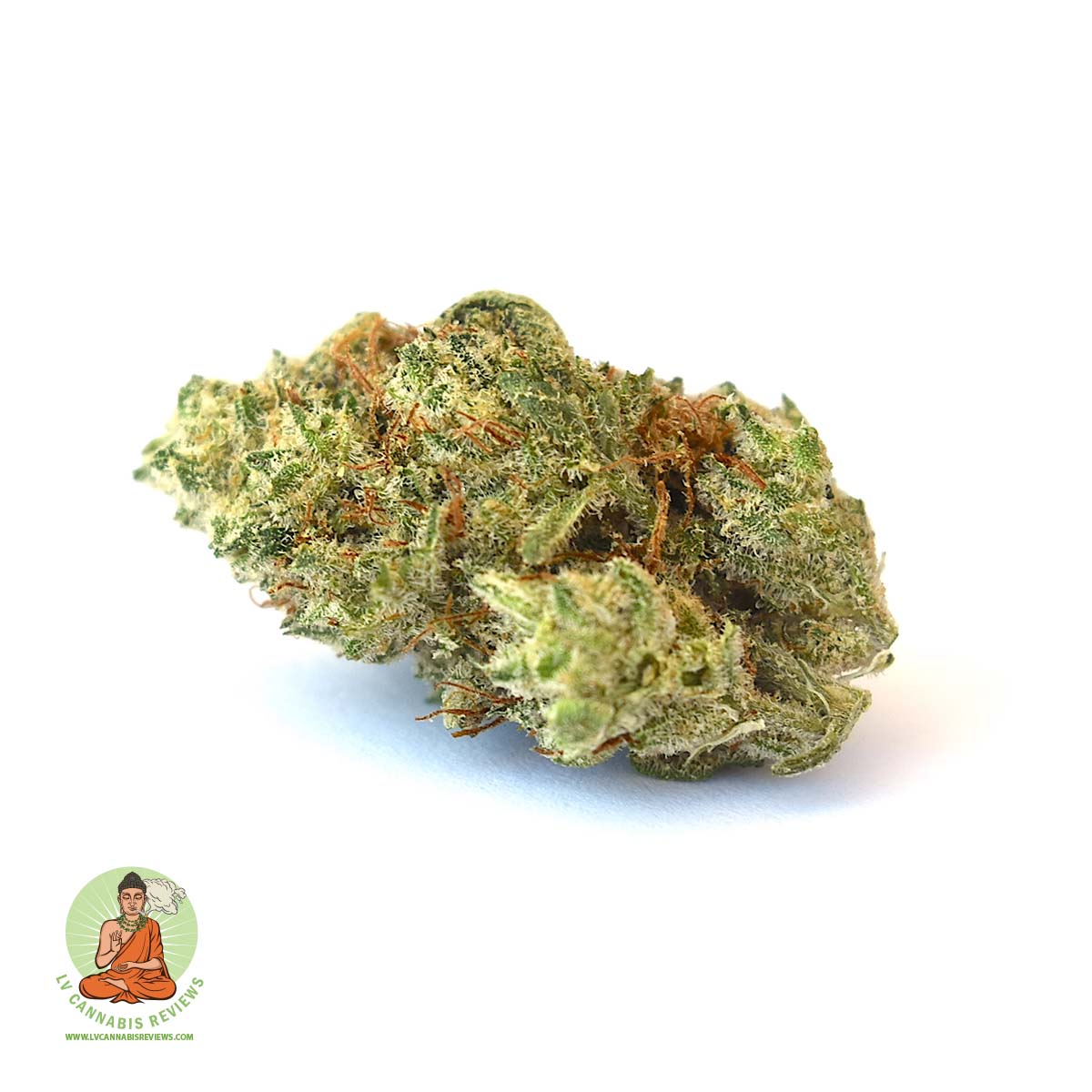 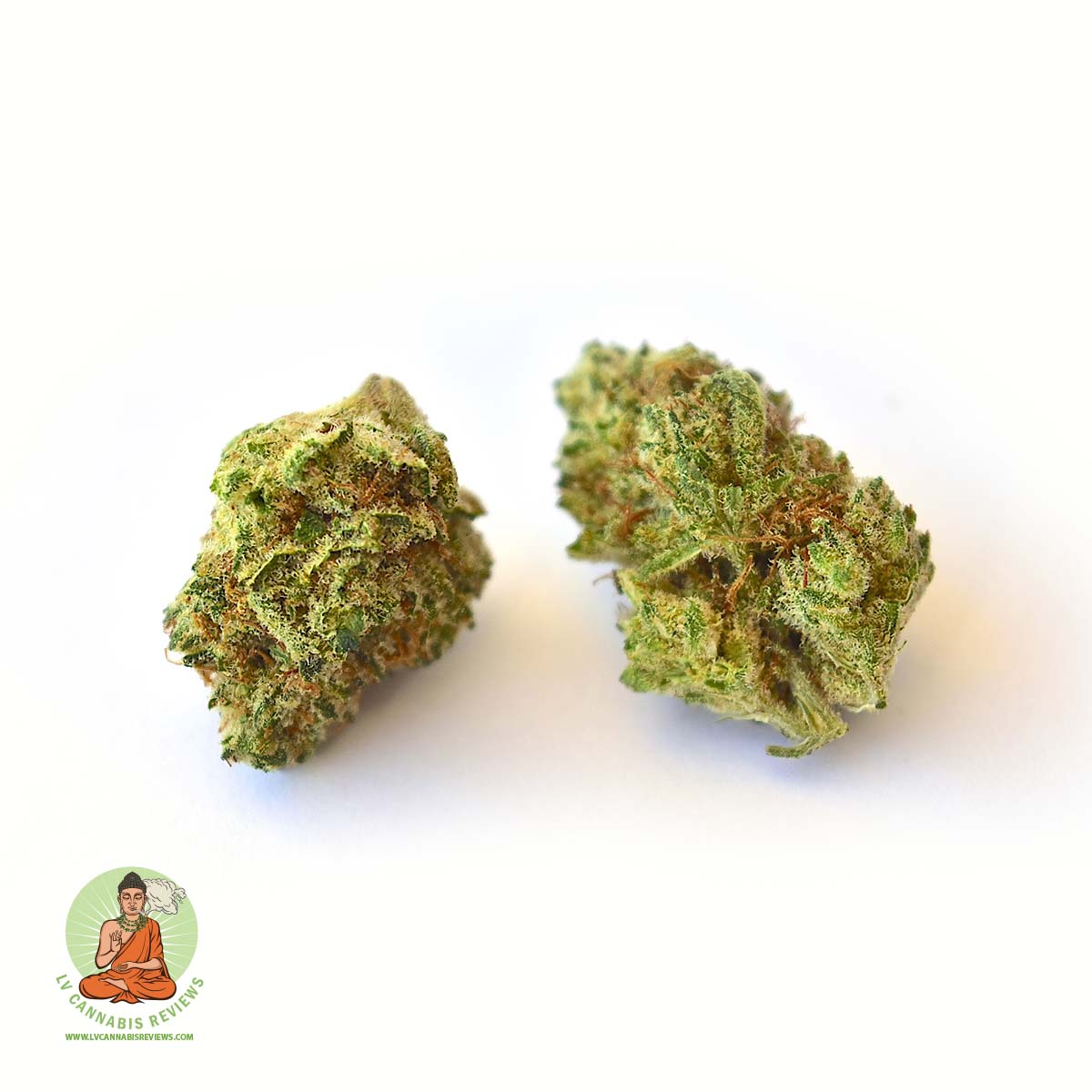 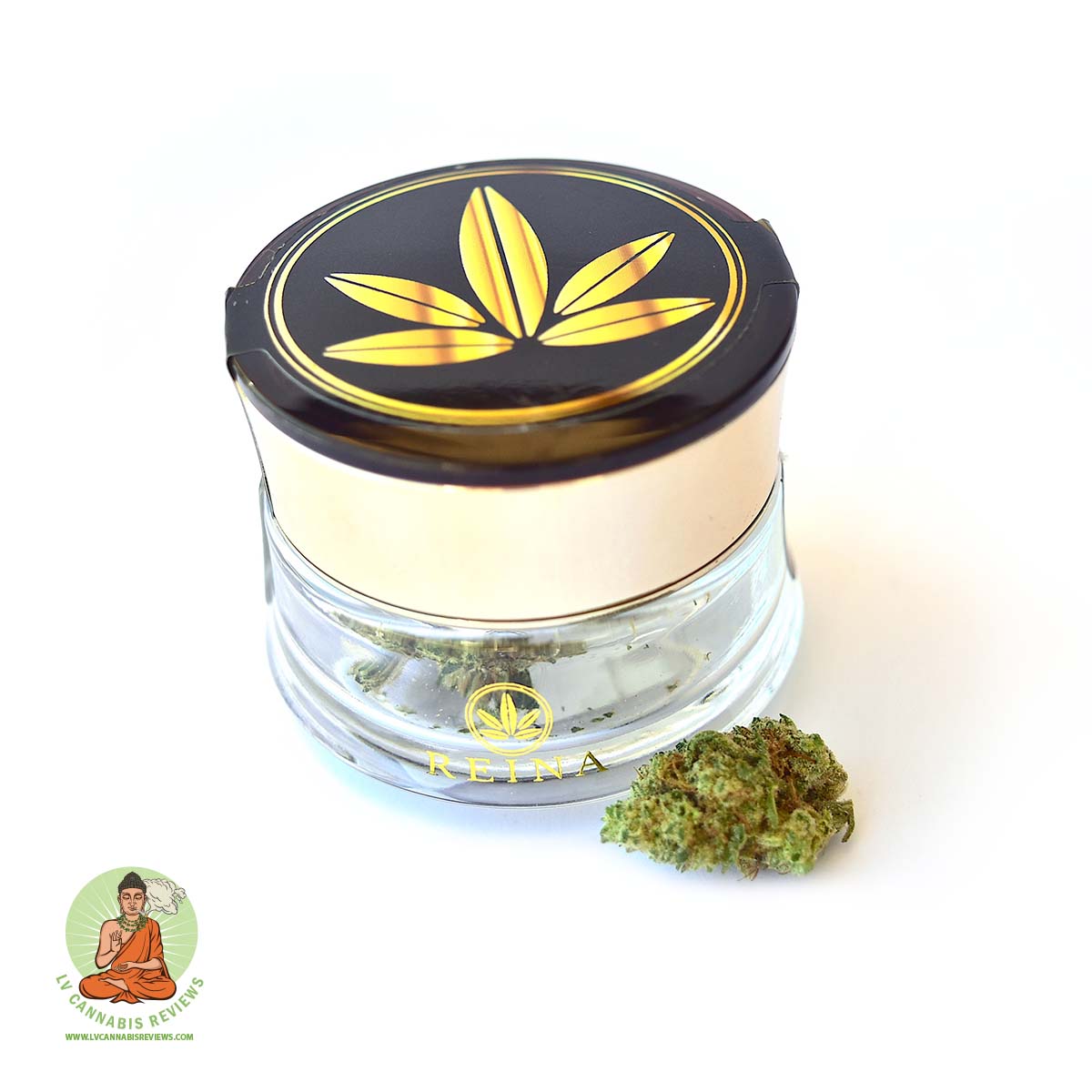 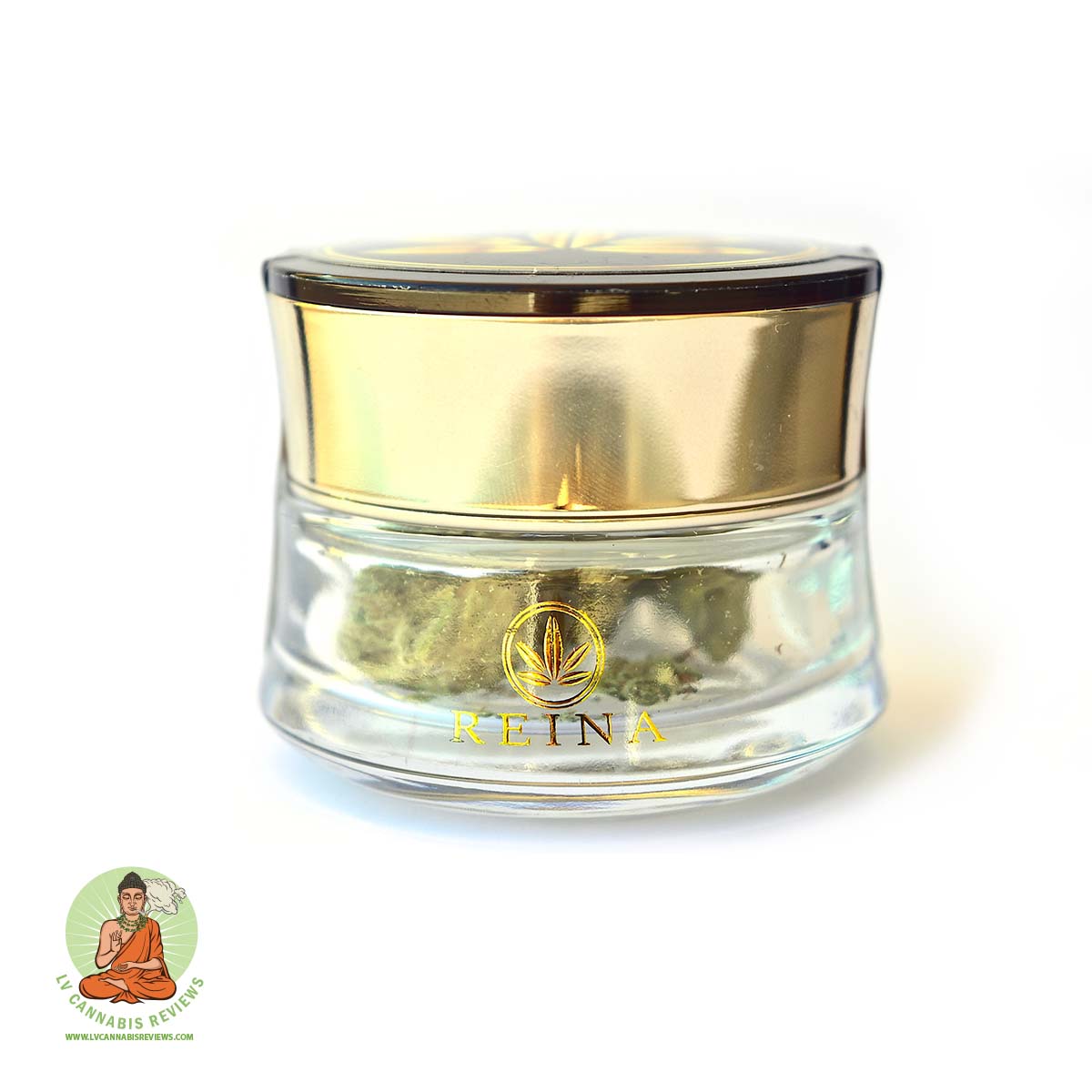 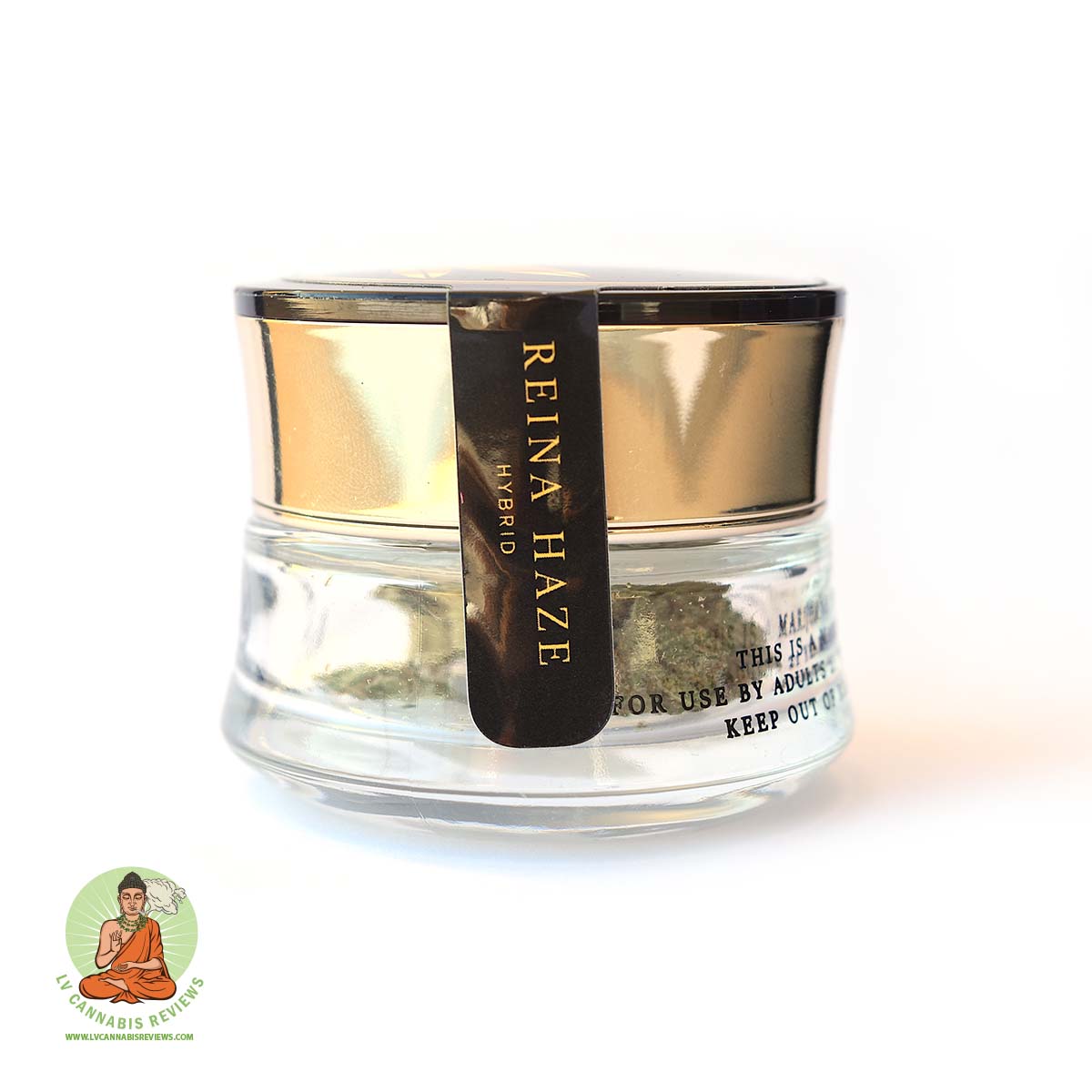 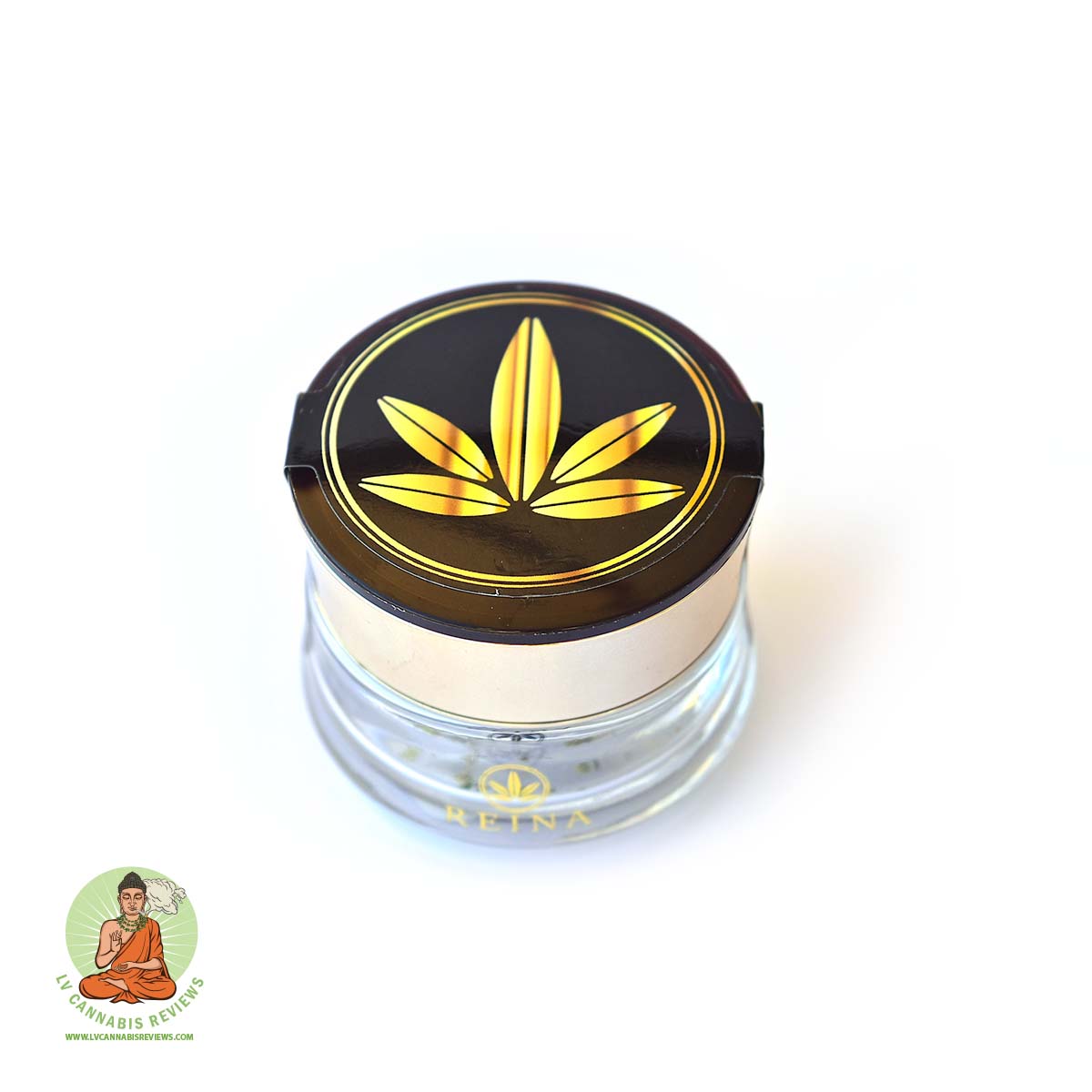 Appearance
The light green buds are very symmetrical 95%
Aroma
It smells of a fresh, crisp, clean mix of citrus and pine 90%
Taste
Citrus notes play a bigger role in the scent 90%
Effect
A high-functioning strain 90%

Simply known as “Haze” is a sativa dominant strain from Reina that checks in at 20.51% THC. The effects are known to be energetic, euphoric, creative, and alert. Haze is originally a California-bred strain hailing from Santa Cruz and was developed in the 1960’s by the Haze Brothers by combining strains from Colombia, Mexico, Thailand, and India. This heavily sativa-dominant hybrid strain is great for daytime use and can often produce happy, invigorating, positive, and creative feelings.

See also: Meltdown is a 5⭐️ strain that will have you melting

Appearance 4.75/5
The first thing that was the most impressive was the packaging it came in. This container from Reina looks like something straight out of Estée Lauder. The rose gold top looks just like every other makeup or perfume container one might come across at an Ulta Beauty supply store. The packaging it comes in adds a lot of class, making it feel like a high-end product. The appearance of the buds themselves are extremely appealing, and they are not camera shy. These flowers posed nicely and were very photogenic. The light green buds are very symmetrical and are generously coated with tiny trichome crystals.

Aroma 4.5/5
It smells of a fresh, crisp, clean mix of citrus and pine. If Christmas morning and marijuana had a child, this would be the strain. The pleasant aroma is fairly strong. Perhaps this is an indication as to why the container is so thick. The more one continues to smell it, the more appealing it becomes. Its smell is so clean and sharp, it leaves one wondering if it will translate to taste.

Taste 4.5/5
Ironically, as the citrus notes play a bigger role in the scent, it is the pine and woody notes that show through more in the flavor profile. The lemon-like citrus is still there, but it is not nearly as prominent as one would anticipate it would be. The pine and earthy notes are connected with pinene, which can have the potential effects of alertness and memory retention.

Effect 4.5/5
Haze has always been a high-functioning strain, or better yet, a strain for functioning while high. There are several derivatives of haze strands available on the market. Purple Haze, Lemon Killer Haze, and Ghost Train Haze, just to name a few. Reina Haze nestles in nicely with the rest of these strains. The effects of the haze strains are invigorating and positive. They are also known to stimulate creativity.

Once a haze lover, always a haze lover. Not sure if that is even a thing, but let’s make it one. While all slightly different in their own right, the hazes produce similar effects. Leading to an uplifting alertness, and an elevated mood of stress relief. Haze by Reina, or Reina Haze if you will, has been nothing short of impressive. From the packaging all the way down to the effects, I am thoroughly impressed, and would be very interested to hear what other haze lovers have to say.

If Planet 13’s goal is to make people feel as comfortable as possible while taking part in something that still remains (for now at the time of writing) illegal on a federal level, they have definitely achieved that. Those who have been to various dispensaries know the feeling of walking through double-locked metal doors and the works. Planet 13 has none of that. It is as wide open as a mall. It takes all the elements of a typical dispensary and turns them on its head. There is no factor of feeling like one is doing something wrong or that they are in a place they should not be. Some dispensaries come equipped with this criminal feeling attached to them. Any readers that have been around know the feeling that is being referred to. This experience is the opposite of that, and in that sense, Planet 13 has succeeded greatly.

Planet 13 is a Walmart Supercenter of a dispensary. This place is absolutely massive, and yet currently only a small percentage of its 112,000 square foot complex is accessible to the public. They are referring to it as a “Cannabis Superstore and Entertainment Complex”. They even offer their own products and strains that can only be found at Planet 13. Located on Desert Inn, just west of The Strip, Planet 13 is a vacuum for tourists on all levels. The place itself is a spectacle to be seen. It feels like entering an aquarium, or maybe more accurately a planetarium. Get the ticket and take the ride, entering into corporate cannabis land. Wait in line at the cannabis amusement park. The Apple Store of cannabis has arrived, with everything from Planet 13 branded coffee mugs to flip-flops. An experience that only one can witness for themselves.