It seems to happen in every industry. There is always that one behemoth superstore that comes along, and puts everything one could ever need right at the customer’s fingertips. These places make it so easy on the user, that there is really no need to ever venture anywhere else.

We have seen it happen with all sorts of stores, especially with giant establishments like Walmart. At these places, one can pick up nearly everything they could ever imagine under one roof. They have everything from a loaf of bread to car batteries, and even sporting equipment. And you can pick up whatever your heart desires, all while getting your oil changed. If you happen to need a pair of jeans, well, they have that, too.

Home Depot has done the same thing with the hardware store. They have combined all possible home improvement needs in one location. Whether you need something for plumbing, electrical, hardware, gardening, or building materials – they have it all. They even have an indoor lumberyard. There really is no need to go anywhere else. How could the “mom and pop” hardware stores possibly compete? They don’t even possess the capacity to fit all those different things in their humble storefronts.

In the realm of fast food, McDonald’s clearly suffocates the rest of the competition. They have done it bigger (and better) than everyone else for decades. These locations are literally everywhere. Not only are there multiple establishments in nearly every town across the country, but internationally, too. Take a trip abroad, and I would be surprised if you still don’t run into a pair of golden arches somewhere. If somehow you don’t, then congratulations, you are surely traveling off the beaten path. However, even then, you still might see one.

The same thing can be said for Starbucks. This Seattle based coffee company is literally everywhere today, and sometimes they are even right across the street from one another. In New York City, alone, there are 350 Starbucks. That’s outrageous. These things are in airports, shopping centers, Targets, you name it. Most of us are probably sitting within a couple miles of one right now.

So why should cannabis be any different? Personally, I believe it is just a matter of time before some ganja conglomerate comes along and strong-arms the rest of the competition. If you didn’t realize it already, an example of such a behemoth already exists, and it goes by the name of, Planet 13. While MedMen might have more locations, Planet 13 is set to do something that perhaps MedMen never even thought of. And quite frankly, they couldn’t have started in a better location – Las Vegas.

Yes, Los Angeles is massive and has a larger population, but Planet 13’s “amusement park of cannabis” fits in perfectly just off The Strip in Sin City. It enjoys an infinite turnover of visitors and tourists that Las Vegas receives on a daily basis, and that keeps this desert superstore fresh in everyone’s eyes. With Las Vegas receiving over 42 million tourists per year, Planet 13 really could not have chosen a better test market.

This place is so confident in itself, there have even been talks about this massive marijuana superstore expanding into California already, even though the original location in Las Vegas still hasn’t “fully” opened yet. Which has me thinking that they may want to “learn to walk before they can run.”

While the dispensary aspect of the place is indeed open for business, and has been since October 30, 2018, there are several other components in the works that are just getting off the ground. These include Purc Coffee Shop and Rickety Cricket.

Once done, Planet 13 will be able to give its visitors the ability to shop, eat, drink, and the freedom to cruise through recreational (or medicinal) cannabis – all in one place. The two newly added features combine to create a new 4,500 square foot space, and are able to accommodate between 130-150 patrons.

READ ALSO:  The Top Things To Discuss With Your Budtender

Rickety Cricket is an award-winning Arizona based bistro/pizzeria and craft brewery chain. There are now four locations, with the opening of the most recent establishment being inside Planet 13. They have won multiple awards for their pizza, including 2nd place in the world at the International Pizza Expo in Las Vegas. With over 3,000 visitors a day, Planet 13 now has a place for its patrons to fight off those inherent, inevitable “munchies.”

On November 1, 2019 Planet 13 announced that they were granted the final permits to open their 15,000 square foot production facility, as well. Since their original opening, they haven’t been able to keep their in-house brands in stock with the amount of foot traffic that they are receiving on a daily basis. The new facility will increase their production capacity by over ten times, which will help them meet the ever-growing demand.

Visitors will also be able to witness the process taking place through the 115 ft. glass windows. Interactive kiosks will be available near the production windows to help educate the public on the creation of individual products. This offers Planet 13 a very powerful branding opportunity. With customers being able to watch (and learn) what goes into their favorite products, this creates a more tangible aspect to the entire experience.

The facility is capable of producing up to 600 pounds of plant biomass per day when operating at full capacity, which its approximately 1300% more than Planet 13’s current production facility.

But wait, there is more. 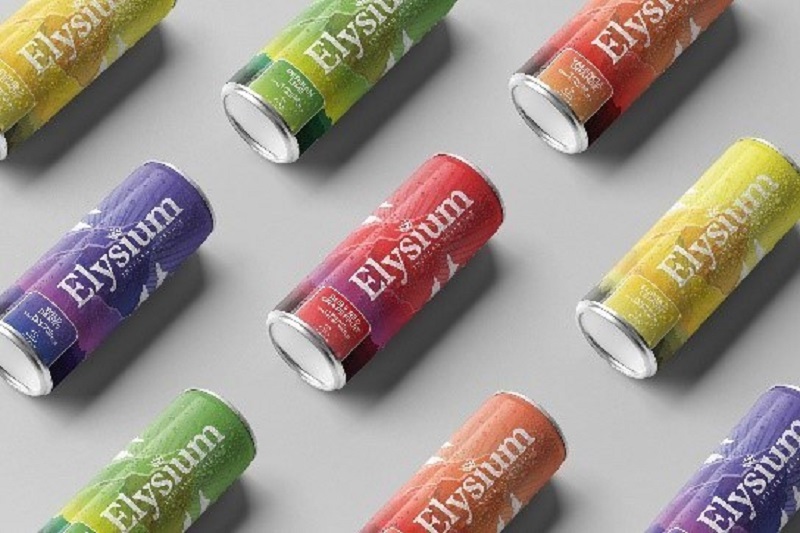 Out of these new products, perhaps the most interesting one is their new beverage line. Everyone knows that spiked seltzer has become the latest craze sweeping the nation, with brands like White Claw, Truly, and Bon & Viv. These beverages can be found at nearly every convenient store or gas station nowadays.

READ ALSO:  The New Cannabis Capsule Is So Powerful It Can Replace Any Pain Killer

The new line by Planet 13 is called Elysium, and it’ll be a lineup of THC-infused sparkling waters available in a variety of different flavors. I guess it was just a matter of time before someone jumped on the “flavored water” train, and infused it with cannabis. But that is merely good business.

This low-calorie sparkling water will come in a number of flavors including: Persian Lime, Eureka Lemon, Valencia Orange, Wild Berry, and Ruby Red Grapefruit. How sophisticatedly exquisite. The beverages will have zero sugar content and use all-natural fruit flavorings.

While many Planet 13 investors already have their sights set on Los Angeles, there are still various inner-workings going on in Las Vegas that they need to complete. From a business standpoint, I wouldn’t jump the gun too quickly, as there are a lot of aspects that still need to play out in the desert, to see if this cannabis superstore’s business model is, in fact, going to be successful. With that kind of foot traffic per day, however, it definitely appears that they are on the right track.

Watch out Mom and Pop, this cannabis superstore is officially on its way.