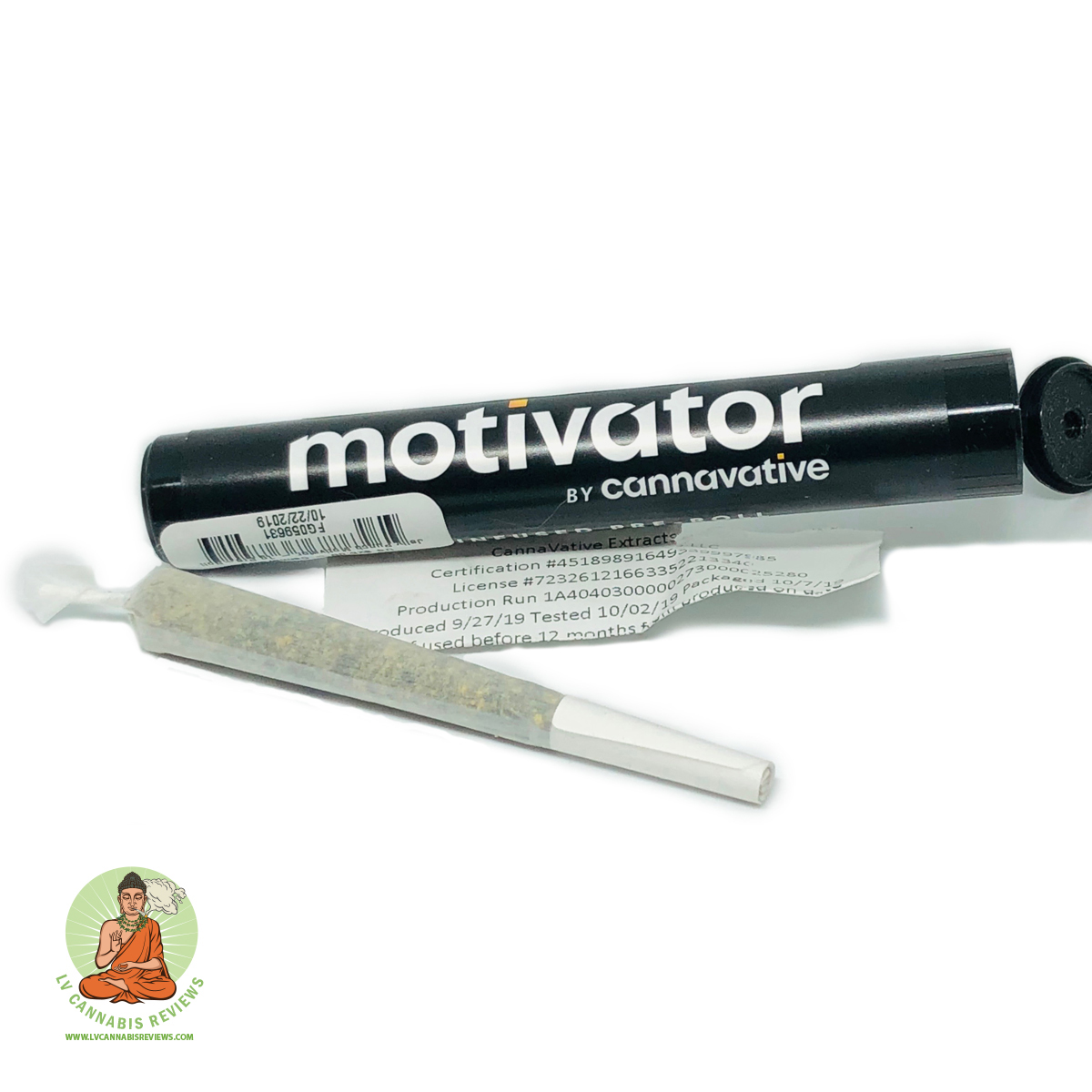 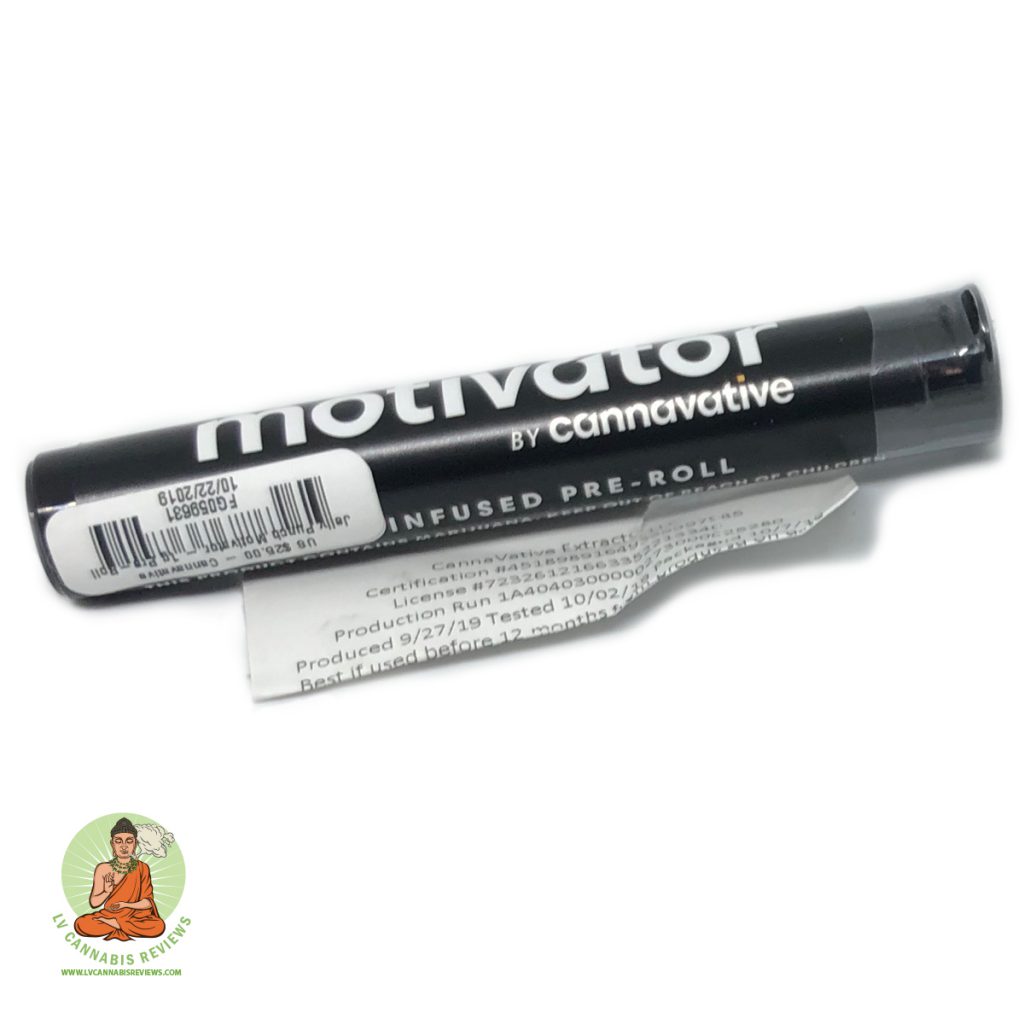 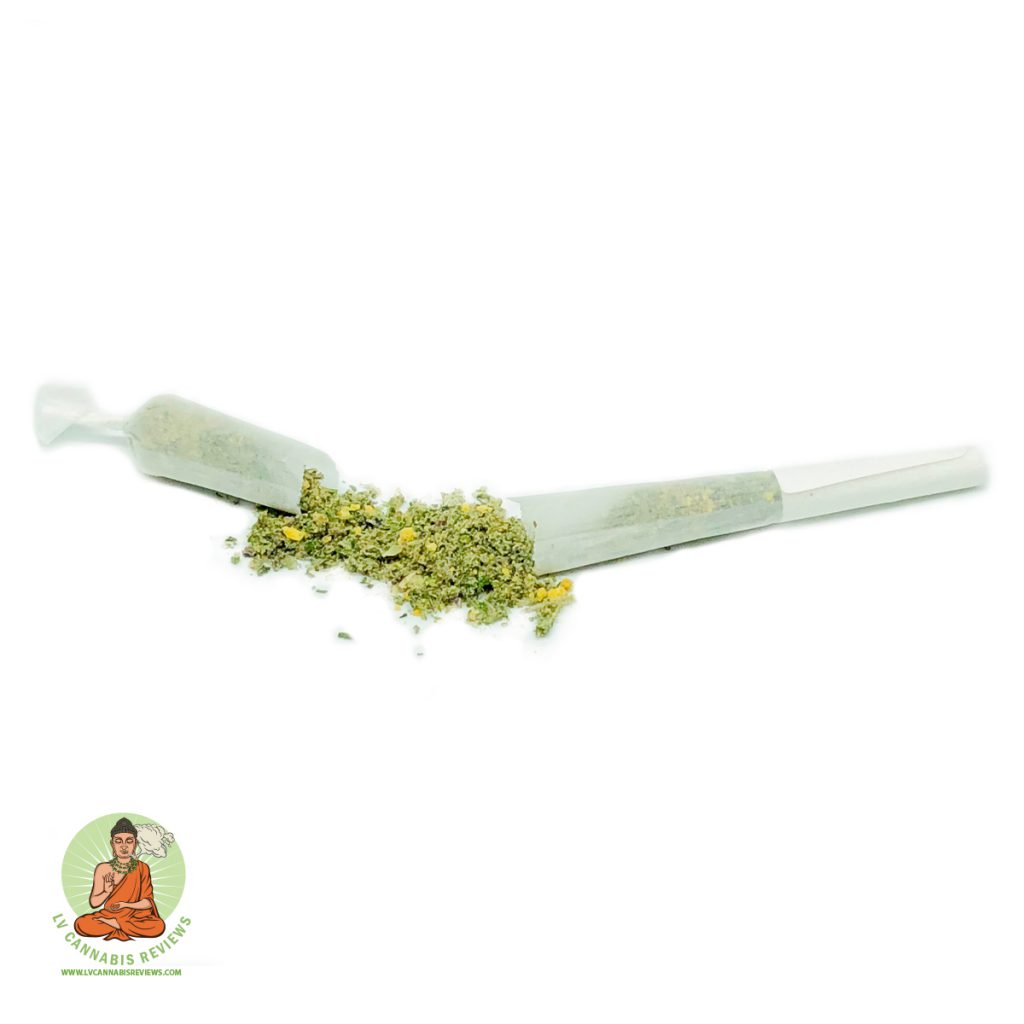 Appearance
Motivator is one of the few pre-rolls that look appealing on its own 100%
Aroma
The smoke has a different aroma 90%
Taste
The weed, meanwhile, tastes slightly minty 90%
Effect
I wasn’t sure how strong the pre-roll would be 100%

Cannavative’s Tahoe OG Motivator infused pre-roll is interesting. Like the rest of the Motivator line, the pre-roll is mixed with weed and honeycomb. However, despite the dank THC boost provided by the concentrate, Tahoe OG only hits 28% THC. It might be bizarre to some of you to hear a pre-roll described as “only” testing at 28% THC, but we’re in a new world now. It’s not unusual to find concentrates boasting 90% THC.
Product price: $25

Appearance 5/5
The weed glows yellow and bright green beneath the thin joint paper. Each small speckle of honeycomb glitters in the light. The Tahoe OG Motivator is one of the few pre-rolls that look appealing on its own. I don’t have to tear open the wrapping to appreciate the collage of colors. When I do break open the joint, the weed flutters out in a gush of yellow, green, and orange. I’m interested to see what the Tahoe OG buds look like.

Aroma 4/5
Tahoe OG makes me think of Christmas. The weed has a heavy pine needle scent that hits the nose the moment the joint is freed from its container. Underneath the pine needle smell, I can detect a diesel-like musk. The smoke has a different aroma, the diesel notes are gone while the earthy scent is intensified. I thought the weed would smell stronger but you have to get close to the weed to smell it. If you slipped the joint into your pocket, the people around you probably won’t be able to smell it.

READ ALSO:  So You Want to Start a Cannabis Business: Advice for the Absolute Beginner

Taste 4/5
The natural flavors of Tahoe OG and honeycomb blend together beautifully. Instead of the sweet, sugary flavor that the brain naturally associates with honeycomb, these golden globs taste like bits of earth coated in a chemical slime. The weed, meanwhile, tastes slightly minty. The strange brew of flavors makes me want to smoke more and more.

Effect 5/5
I wasn’t sure how strong the pre-roll would be. On one hand, it tests at 28% THC, a number I would salivate over if I was buying flower. On the other hand, 28% is pretty low for an infused pre-roll. It must get all of its heft from the concentrate. Well, wherever the mojo comes from, it definitely has it. I felt jazzed up and happy after a single puff. I can’t imagine smoking this pre-roll and being in a bad mood at the end of it.

The Tahoe OG Motivator pre-roll by Cannavative isn’t as potent as the other entries to the Motivator line. Oddly, I think that’s part of its appeal. It’s like training wheels for low tolerance, inexperienced smokers. You’re in Vegas, this is your first time at a dispensary and maybe even your first time trying cannabis. You can play it safe with 15% THC buds or you can get wild and spring for a concentrate. The Tahoe OG pre-roll satisfies the urge for a concentrate without leaving you blitzed.

MedMen is already one of the biggest names in the Vegas cannabis scene. There are three dispensaries spread out across the valley. This time, I ended up at the “Strip” location. It’s not actually on the Strip but it’s pretty close. It’s practically across the street from the Hard Rock. Stop by on Friday or Saturday night and you might encounter hordes of drunken tourists gamboling on the sidewalk.

The dispensary’s main draw is its simple, efficient sales experience. Too often, when you go to pick up legal weed you have to spend at least a few minutes sitting in a drab waiting room. MedMen eschews this setup in favor of an open design plan. There’s a reception podium by the front door. Once you breeze through the check-in process, you’re free to wander. The inventory is arranged in gleaming wood and glass display cases. Pre-roll here, edibles there, etc. If something strikes your fancy, you can flip through the iPads embedded into the cases. You’ll find information about the strain or product as well as the price.

There’s a lot to take in. A budtender will eventually grab you to take your order. Someone else will ring you up. Locals get a 10% discount, while everyone can join their rewards system. Spend $200 and you’ll get $5 off your next purchase.

MedMen appeals to tourists because of the atmosphere. Party music blares from the speakers, the area is crowded with bustling bars and restaurants. Stop by MedMen before hitting the Strip to have a good time.