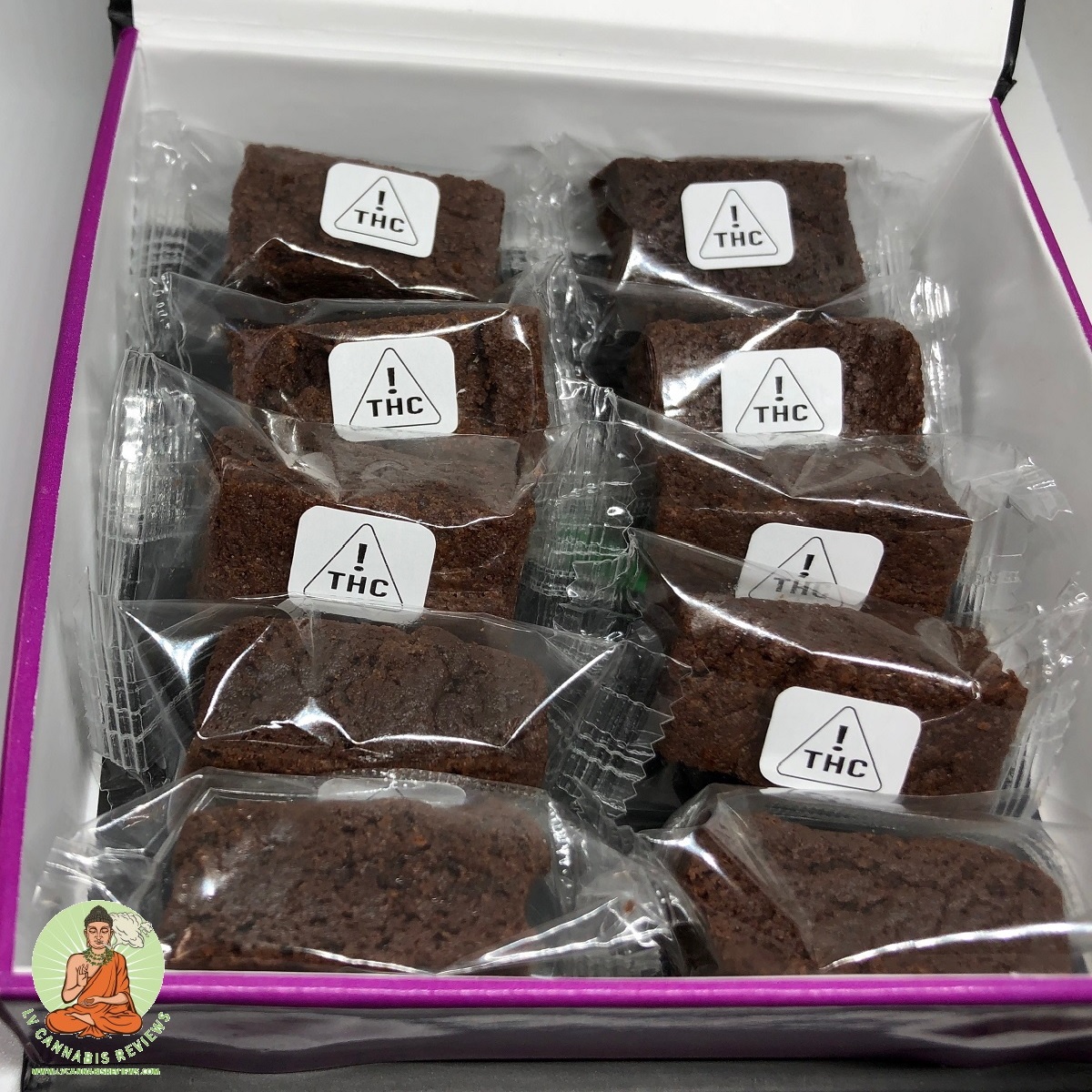 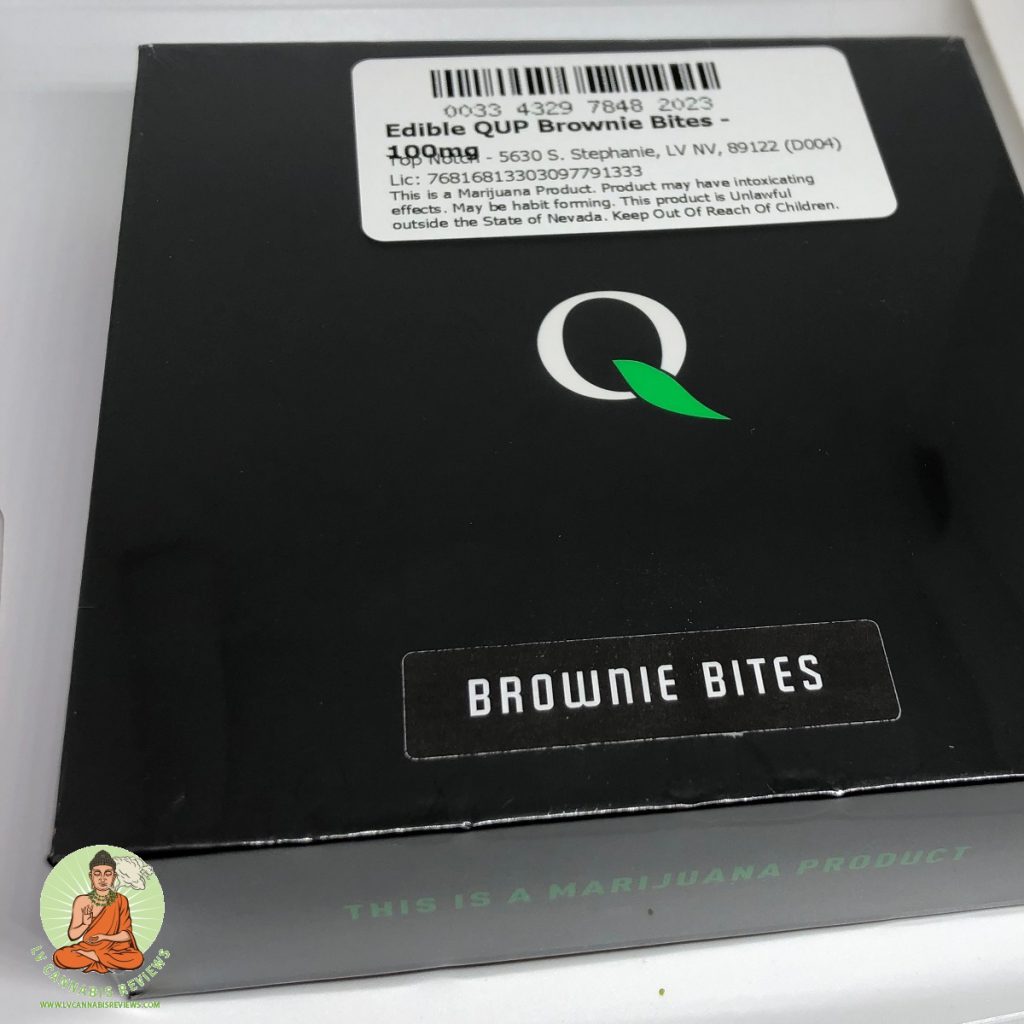 Qualcan’s brownie bites are a steal. $24, tax included, for 10 fat brownie squares. Each brownie is loaded with 10mg of THC. If you really want to feel the effects, it’s easy to eat the entire box at once. At Top Notch, the brownie bites stand out because the box takes up a lot of shelf space.

Appearance 5/5
They look exactly how you think brownie bites should look. They are dark and fudgy with an outer crust and a moist interior. Each bite is individually wrapped, making it easy to dose yourself. Eat one at a time or shove all 10 brownies into your mouth at once, it doesn’t matter. You’re in control. There is a THC stamp on the packaging, but once they are unwrapped, the infused brownie bites are indistinguishable from those sold at your local bake sale.

Aroma 3/5
There isn’t much of a smell. The chocolatey aroma that most people associate with freshly made brownie is missing. Instead, there’s a dull, faintly sweet odor like a stale cookie. It reminds me of the animal crackers I used to eat as a kid. The aroma isn’t nearly as appetizing as it should be. If you were at a bakery, you would probably leave these sitting on the shelf. They are enticing because I know they are full of THC.

Taste 3/5
If you just want to nosh on something tasty, avoid these brownie bites. The flavor is dry and bland where it should be rich and complex. They taste like they were made months ago and left out on the counter. It is strange because there is no THC taste, which is usually what ruins edibles. If only they would focus on making on a better brownie batter. The boxed stuff at the grocery store tastes better than this.

Effect 5/5
What they lack in flavor, they make up for in effect. I gobbled three bites and waited for it to hit me. It didn’t take long. The high came fast and strong, exactly the way I like it. If you are an experienced stoner, you can eat the entire box in one sitting with no problem. If you aren’t, stick to a brownie or two until you figure out how they affect you. It takes about an hour or two depending on your size, and if you have an empty or full stomach.

Brownie bites are a good product for people who are just getting into edibles. The taste is inoffensive, which makes them easy to eat. And they are strong, allowing you to really experience the effect of edibles. Some people find that they prefer smoking cannabis. Usually, I do too, but I’ll mix an edible into the rotation every few weeks or so.

Qualcan’s brownie bites are a middle of the road product for me. They are not particularly delicious or disgusting. If you buy a box, you will probably be more satisfied with the effect than with the flavor. You could doctor them a bit if you really wanted to make them pop more. Dip them in milk, or slather a bit of frosting on top.

Top Notch looks like a locals dispensary. The squat white building is planted across the street from a giant coal plant. The hustle and noise of The Strip are far from this industrial spot. However, unlike most dispensaries trying to attract a local crowd, Top Notch doesn’t have a loyalty program. Visit once, visit a thousand times, and you are going to pay the same price.

It doesn’t matter what time I show up, there’s always a crowd. I can’t remember ever finding the lobby empty. Although the tangle of customers looks intimidating when you are in a rush, Top Notch budtenders are pretty fast. This time, my number was called before I had time to mentally complain about the wait.

The main retail space is separated from the lobby by a heavy door. When it’s your turn, you have to join the crush of people who entered before you. If they are slow, you might end up jockeying for space in front of the display cases. The day’s strains are arranged in small, perforated containers on top of the glass. You can smell the trapped bud to get a sense of what you are about to buy.

Top Notch has a decent stock of edibles. You can find chocolates, gummies, brownies, and everything that you might expect at a modern Vegas dispensary. There are plenty of concentrates and vape cartridges as well. If you are trying to avoid THC, the dispensary sells a wide range of CBD-only products.