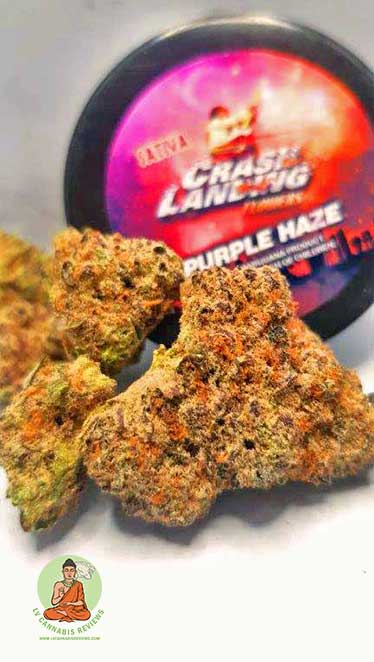 After trying Purple Haze, I understand what Jimi was talking about. The fusion of Purple Thai and Haze has been a community favorite over the years with no signs of changing. It was first popularized in the late 60s by Mr. Hendrix’s song bearing the same name. Even so, the strain's notoriety quickly grew with its powerful effects and vivid purple color.

Appearance 5/5
Purple Haze's buds, regardless of the gram or eighth sizes, were fairly dense. Covered in large pockets of purple and spots of green, the buds are clustered around orange hairs and dusted in a layer of trichromes. Some nugs can appear more green, like many Sativa strains; but, once you start to break them down, darker tones are deep within.

If users are looking for flowers with an Instagram-worthy aesthetic, this strain is a winner. Its Indica-look and Sativa-smell can leave some newbies a little confused, but the combination is one for the go-getter consumer.  It's exactly what one would expect when you hear ‘Purple Haze.

Aroma 5/5
Immediately upon opening the jar, a pungent aroma burst out. Citrus and pepper invade your nostrils leaving behind the darkness that you can't wait to smoke. A flurry of lavender and grape grows stronger when you break this flower down for consumption, adding to the sweetness of the Sativa terpenes. The deeper you inhale, the more the limonene turns to a diesel smell.

When ignited, the aroma does die down a bit. The typical deep woodsy smell of ‘Purp’  is followed by the smell of gas before mostly fading off.

The terpenes in J.H.C.L.’s Purple Haze may be one of the first things users see when they look at this strain. They can be assured that the choice is well worth it. Do it for the Terps!

Taste 5/5
The taste, just like the aroma of this strain, is a perfect blend of Indica and Sativa. It's smooth and sweet, but only for the initial intake. The Myrcene level in this strain is half the amount of limonene, adding less pepper to the citrus base. It can create a rough floral taste that can be harsh to some but smooth to others. Personally, Purple Haze's taste is best experienced in a water pipe/bong. The taste can fade pretty quickly but can come on strong. Depending on how big consumers are on taste, they should dictate how to enjoy this.

Effect 5/5
Regardless of everything, Purple Haze’s high is the selling factor. As a true Sativa from the hippie-era, it can leave users reflective and talkative. It provides an almost immediate cerebral buzz and spike of creativity while giving the body its own sensation. For those looking for a burst of energy or a social strain, Purple Haze provides that and so much more. After a long day of work, this strain melted away any stress and negative thoughts that I had. Though I was pretty deep in my head after smoking, most of the thoughts found their way out as I wouldn't stop talking. The name says ‘Haze' but, that portion is far off for many users. Purple Haze provides sudden inspiration and introspectiveness to keep users up and on the move. With high consumption or new consumers, however, this strain can leave you cloudy on the couch. Long-time consumers can experience a full day of positive vibes and a willingness to explore while others may have trouble making the body as willing.

Purple Haze makes for a great social strain or something to combat stress and depression. With its strong Sativa onset and light Indica attributes, I would suggest this strain for any afternoon unwind or a Stoney wake and bake. The high is extremely uplifting, but not the best in the arena of focus. Long-time users may be able to brush off the Myrcene's couch-lock but new users may not. Don’t let that deter those green to cannabis away from Purple Haze! Despite the lack of movement users may be making, this purple strain can help ease mild body pain. Additionally, the high levels of limonene in this strain aid against stress and depression. Especially in the case of new or light consumers, this strain can be a great medical aid as well.

Overall, J.H. Crash Landing's Purple Haze is a strain I would try again.  The smell, taste, and high far exceeded what I expected. I want to caution new users again to limit how much they consume. The high limonene and Myrcene amount can give some headaches or just put you to sleep. With that in mind, be aware of your plans for the day before smoking. For long-time consumers, however, I think this would make a perfect daytime strain. The terpene level and combination can be useful to those who need to be focused and social in the mornings, but don’t want to be overly giggly. Additionally, the calming effects gave me a cerebral buzz and aid against my stress and depression. For any users, heavy or light, this hazy dream is one you don’t want to miss!

Have you tried J.H. Crash Landing’s Purple Haze before? What did you think? If not, check it out at NuWu and share it with us!

READ ALSO:  Lost variety of ganja smoked by Bob Marley before it was wiped out during war on drugs is being recreated by expert who wants Jamaica to market marijuana 'like Champagne in France'

In the early morning hours, a colossal glass-box structure shines like a cannabis-beacon in DTLV. This particular part of Main doesn't usually see a lot of traffic; but if they do, it's usually going to that spot. NuWu Cannabis Marketplace sits atop a hill right above the company's smoke shop. I drop by just before 10 a.m. and the place is already busy with people and their sunglasses trying to get something for a late wake-and-bake. When I came inside though, there were cases of cannabis products and peripheral lining the building that distracted me from a lot of that.

I gave my ID up at two happy attendants before being allowed into the Marketplace area. Inside, there are groups of shoppers staring down into the cases and comparing purchases. NuWu boasts one of the largest varieties of cannabis products in the city, driving hundreds of locals and tourists alike to the shop every day. Despite it not being my first time visiting, I always get overwhelmed by the plethora of choices. We all know shopping whilst stoned isn't a good idea; but, I equally advise against cannabis shopping while stoned too! You can easily get distracted and enticed by options in cannabis, glass, clothes, and more. It's like being a kid in a candy store, but the stoner edition.