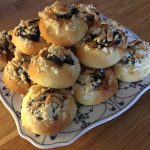 
I love this Apple Crumb Cannabis Coffee Cake for a number of different reasons. But, while there is a lengthy list of positives to draw from when discussing this decadently dank breakfast cake, I’d have to say that I love how it guarantees good moods and positive vibes throughout the day – no matter what life may throw your way.I understand that statement is tremendously vague, but I think you can see where I’m going here. The taste, the effects, the overall experience of eating this Apple Crumb Cannabis Coffee Cake is the perfect accompaniment to a “wake and bake” session. Or, if you don’t have any ganja to puff on first thing in the morning, this cannabis cake will stand on its own, with a series of truly calming, uplifting effects that never fail to hit the spot – in more ways than one.
Calories: 631kcal
Cost: Approx. $25+

Then, when it’s ready, you can mosey on over, grab yourself a portion of this Apple Crumb Cannabis Coffee Cake, and prepare to have one of the most deliciously dank edible experiences of your entire life. Happy eating, my fellow stoners!