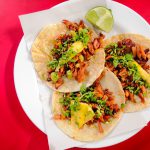 
If I was tasked with trying to list all the things Ilove about tacos, I’d probably be talking for days. There’s really nothing butpositives to say when we’re discussing tacos. And I don’t think I’m the onlyone in the cannabis community that has a soft spot for all things taco-related.And this recipe for Mini Marijuana Dessert Tacos is just another thing to addto the ever-growing list of things I love about this legendary Mexican treat. What’s even better, is these Mini Marijuana DessertTacos couldn’t be easier to make. Seriously. In under a half hour, you’ll havea full batch of infused, fully-dank dessert tacos that you, and all of your stonerfriends, can enjoy after a hearty meal.
Calories: 323kcal
Cost: Approx. $20+

Pretty easy, right? And, on top of tasting phenomenal, they look incredible. If there was ever an edible recipe that seemed tailor-made for social media, this is the one. It’s adorable, tasty, and packed with THC. Now, I must remind you, my fellow stoners, be easy with these mini morsels of marijuana greatness. They will taste great, there’s no denying that, but seeing as how you’ll want more and more, you may quickly forget just how infused these bites are. Which is why I always suggest people take a “low and slow” approach towards edibles. Just nosh on a small amount to start off. Then, in 90 minutes or so, when the effects have had a solid amount of time to release their strength, through your metabolism, you’ll get a better feel for how you, well, feel. If, at this point, you think you could use a slight uptick in effects, just grab another small portion, and give it an equal amount of time to release its potency. But, if you’re more than happy with where you’re at, don’t even worry about another bite. Just let these good vibes and positive moods enhance your day in the most deliciously dank way imaginable. Eat responsibly, my friends.