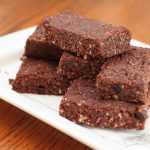 
Some desserts are classic for a reason. For the mostpart, it’s because they have an undeniable reputation for reliable taste andenjoyability. In other words, when you see it on a menu, you know exactly whatto expect, and it rarely (if ever) lets you down. For all these reasons (andmore), people often consider “Brownies” to be one of the end-all, be-alloptions when it comes to post-dinner treats. And this recipe for Mint MarijuanaBrownies is no different.These Mint Marijuana Brownies take everything you knowand love about the standard brownie recipe, and toss a little minty twist intothe mix. Which, in my opinion, takes these already-iconic marijuana morsels toepic new heights. Now, if you’re ready (and willing) to tackle thissuper simple recipe, you’re going to need to obtain the following ingredients:
Calories: 286kcal
Cost: Approx. $15+

That’s how you make a killer batch of Mint Marijuana Brownies in the comfort of your own cannabis kitchen. Enjoy!