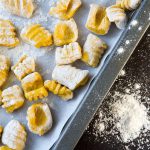 Here’s a list of ingredients that you’ll need to complete this amazing recipe for Ganja-Infused Gnocchi:

You’d be hard-pressed to find anyone under the sun who doesn’t like Italian food. The combination of savory flavors and deep, rich sauces are some of the best in the culinary world. No wonder Italy is considered one of the best food countries on the entire planet. Everything they make becomes an instant classic.How To Make Ganja-Infused GnocchiMany opt for lasagnas or pizzas, but me, personally, I enjoy a nice plate of gnocchi.I know, pretty fancy for me, right? I agree. I just love these tiny buttered potato nugs. If I ever spot this dish on a menu, I don’t even think twice, I order it immediately. And while many spots differ in their interpretations, for the most part, gnocchi is a fairly reliable dish to go with. It’s practically flawless. But even though I consider this to be one of those end-all, be-all meals, I think I may have found a recipe that takes that already amazing flavor spectrum to new heights. And it’s able to reach that seemingly impossible goal with the help of marijuana.That’s right, folks. I’m about to teach you exactly how to make some sincerely scrumptious (and surprisingly strong) Ganja-Infused Gnocchi. Your friends, family, and loved ones will simply flip out over this top-notch taste and calming high – I guarantee it.I understand that such a dish seems too complicated to take on for some, especially for those with minimal experience in the kitchen. But, take it from me, even though this recipe may seem intricate, I promise you that it is far easier than it looks. If you make sure to follow each step carefully, there’s absolutely no reason you won’t be able to create some restaurant-quality gnocchi of your own. So, pack a bowl, get your mind right, roll up those sleeves, and head into the kitchen, my fellow cannabis enthusiasts. Because it’s time to whip up some Ganja-Infused Gnocchi.Remember, don’t rush yourself. Just take this recipe one step at a time, and you’ll be fine.

READ ALSO:  Brighten Your Day With These Marijuana Breakfast Sandwiches

1 thought on “Impress Your Friends With Some Ganja-Infused Gnocchi”